Woodrow Wilson, the twenty-eighth president of the United States, is considered by some historians as the quintessential progressive, a man who opposed big business, favored laws that would help workers, fought against government favors to special interests, and nominated Louis D. Brandeis to the Supreme Court. Yet he was also the product of his southern upbringing, a man who approved segregation in the federal government workforce, applauded the movie ‘‘Birth of a Nation,’’ and saw patriotism as overriding free speech and the right to dissent. 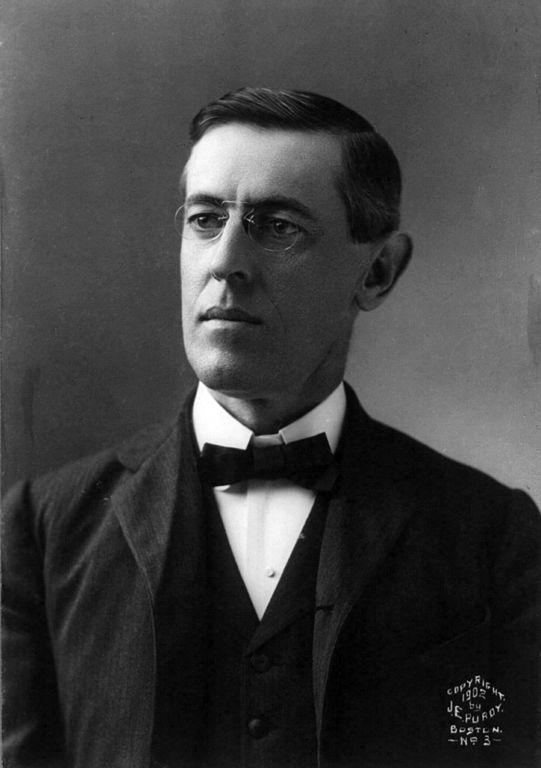 Woodrow Wilson (1856&ndash;1924)There is little in Wilson’s career as a university professor, college president, or governor of New Jersey that involved civil liberties. One might argue that he did show signs of liberalism during his presidency of Princeton University, as he worked to lessen the grip of sectarianism on the school. He expanded the student body to include young men from all over the country and from many different religious persuasions, although no African American would be enrolled until the 1940s. He broke the grip of Presbyterianism on the faculty, drew in men of all Protestant denominations, and appointed the first Catholic and the first Jew to the Princeton faculty. He tried, but failed, to dislodge the exclusive eating clubs and replace them with a more democratic quadrangle system.

During the 1912 campaign, Theodore Roosevelt endorsed women’s suffrage, and Wilson, as did most southerners, opposed it. Wilson, two of whose daughters were suffragists, eventually came around to the idea, and provided critical support in getting the Nineteenth Amendment through both houses of Congress. Once inaugurated as president in March 1913, Wilson filled his cabinet with southerners who shared assumptions about the inferiority of the black race. Led by Postmaster Albert Burleson, they introduced segregation into their departments. Although Wilson did not initiate these discriminatory policies, he did not attempt to stop them, believing that the daily management of government agencies belonged in the hands of department heads. Strong protests by the National Association for the Advancement of Colored People succeeded in halting the effort, but the number and status of African Americans employed in the federal service fell drastically during Wilson’s eight years.

Although Wilson tried to avoid American involvement in World War I, eventually the United States entered the war on the side of the Allies, and once the nation entered hostilities, the government launched the largest federal assault on civil liberties in the country’s history. Although some Wilson biographers have placed the blame for these attacks on heavyhanded men like Burleson and Attorney General A. Mitchell Palmer, Wilson did nothing to stop them. In fact, his own attack on Republicans in the 1918 congressional election—an attack that backfired when he implied that Republicans had not been loyal supporters of the war—is a better reflection of a man who could not accept criticism of his policies, and often took the approach that if a person or organization did not support him and his policies, then they were enemies.

Ironically, the war to make the world safe for democracy triggered the worst invasion of civil liberties at home in the nation’s history. Not all Americans supported entry into the war, and in fairness, initial calls to crack down on dissidents came from Theodore Roosevelt and conservatives in the Republican Party. But Wilson, most of his cabinet, and congressional Democrats quickly endorsed a legislative program designed to stifle dissent and punish leftist thinkers, especially if they were not yet full citizens and could be deported.

The government obviously had to protect itself from subversion, but many of the laws seemed aimed as much at suppressing radical criticism of administration policy as at ferreting out spies. In the Selective Service Act, Congress authorized the jailing of people who obstructed the draft. The Espionage Act of 1917, aimed primarily against treason, also punished anyone making or conveying false reports for the benefit of the enemy, seeking to cause disobedience in the armed services, or obstructing recruitment or enlistment in the armed forces. The postmaster general received power in the Trading with the Enemy Act of 1917 to ban foreign language and other publications from the mails. The 1918 Sedition Act, passed at the behest of Western senators and modeled after Montana’s statute to curb the Industrial Workers of the World, struck out at a variety of ‘‘undesirable’’ activities, and forbade ‘‘uttering, printing, writing, or publishing any disloyal, profane, scurrilous, or abusive language.’’ Finally, the Alien Act of 1918 permitted the deportation of alien anarchists or those who believed in the use of force to overthrow the government.

It is certainly understandable that a government should wish to protect itself from active subversion, especially during wartime. But the evidence indicates that Wilson, preoccupied first with mobilization and then with peace making, gave little thought to the problem, and deferred to some of his conservative advisers, especially Postmaster General Albert Burleson, a reactionary who considered any criticism of the government unpatriotic. There is a suspicion that in coming down so hard on socialist newspapers, such as the Milwaukee Leader, Burleson intended to send a message to the larger, more middle‐class journals that they should not get too far out of line.

The federal laws and similar state statutes caught radicals, pacifists, and other dissenters in an extensive web. The total number of indictments ran into the thousands; the attorney general reported 877 convictions out of 1,956 cases commenced in 1919 and 1920. Although the laws had been challenged early, the government had shown no desire to push for a quick decision on their constitutionality. As a result, some half-dozen cases did not reach the Supreme Court until the spring of 1919, after the end of hostilities.

These cases marked the beginning of a civil liberties tradition in American constitutional law. There had been no such tradition prior to the war, because neither the states nor the federal government had seriously restricted First Amendment rights. These cases also began the process of developing criteria for permissible limitations on speech; the dissents of Holmes and Brandeis initiated the counterprocess by which the courts ultimately became the defenders of civil liberties against the executive and legislative branches.

The speech and press cases of 1919–1920 foreshadowed the indifference to civil liberties that marked so much of the 1920s. With the peace, for example, thirty‐two states enacted new sedition and criminal syndicalism laws to control supposedly dangerous ideas. But the worst outrage came with the Palmer raids, which triggered the great ‘‘red scare.’’

The awkward transition from war to peace unsettled the American people. The Wilson administration, obsessed with foreign affairs after the 1918 armistice, made no effort to effect a smooth demobilization. The War Department, for example, canceled hundreds of contracts, throwing thousands of men out of work at the same time that the armed forces were discharging some 4,000 men a day from uniform. Industry used the end of the war as an excuse to cut wages or negate union recognition. As a result, some four million workers went out on strike in 1919, and by the end of the year, the public began to hear—and believe— rumors that radicals had instigated the strikes. Aside from economic strife, the summer of 1919 also witnessed bloody racial riots in both the North and South.

Attorney General A. Mitchell Palmer, a Pennsylvania Quaker and formerly a Progressive congressman, saw radical plots everywhere. He urged Congress to enact peacetime sedition laws, and he decided to deport radical aliens. In June 1919, Palmer installed the young J. Edgar Hoover as head of the new General Intelligence Division of the Bureau of Investigation, with orders to collect files on radicals. On November 7, 1919, agents began raiding the headquarters of suspected subversive groups, arresting people without warrants and paying little attention to basic procedural rights. In the largest raid, on January 2, 1920, agents arrested between four and six thousand people, and detained half of them in crowded jails for long periods of time. Later that month, the New York Assembly ousted five duly elected members because they were socialists.

Fortunately for the country, the red scare receded almost as quickly as it had come. Palmer overplayed his hand, and after the widespread disruptions he had predicted for May Day 1920 failed to materialize, his credibility—and his hopes for the Democratic presidential nomination—vanished. Acting Secretary of Labor Louis F. Post managed to slow down the deportations, while prominent conservatives such as Charles Evans Hughes, as well as church and civic leaders, spoke out against the high—handed abuse of civil liberties.

How much, if anything, Wilson knew about this is hard to say. Preoccupied with trying to get the Treaty of Versailles ratified, Wilson had gone on a long campaign tour to win over the American people, and had suffered a serious stroke in September 1919. Incapacitated for several months, day-to-day decisions were either left in the hands of the cabinet or made by Wilson’s wife and his physician, Admiral Cary Grayson. But given his indifference to civil liberties during the war, and his hostility to criticism at all times, it is hard to say whether Wilson would have attempted to curb Palmer’s excesses. However laudable his vision of a world order may have been, Wilson’s record protecting the civil liberties of American citizens is atrocious.