One of the two major pieces of civil rights legislation of the 1960s, the Voting Rights Act of 1965, used the power of the federal government to preempt state resistance, particular in the South, to blacks exercising their right to vote and enforce the Fifteenth Amendment to the U.S. Constitution. 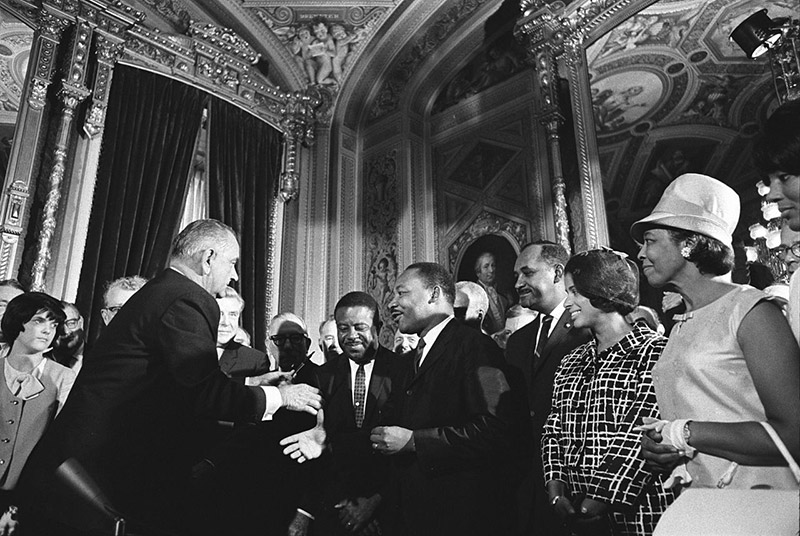 Voting Rights Act of 1965During the era of Jim Crow and segregation, most Southern states enacted roadblocks (such as literacy tests, poll taxes, and other measures) to prevent blacks from voting. With the rise of the modern civil rights movement in the 1950s and 1960s, the disenfranchisement measures came under attack. Yet it was the public demonstrations by blacks and the violent reactions by whites who supported segregation that prompted the enactment of the Voting Rights Act.

With plans to march to the state capital of Alabama, black marchers were attacked at the Edmund Pettus Bridge in Selma, Alabama, by state troopers. With television cameras rolling, the attacks prompted outrage, particularly from President Lyndon B. Johnson. He responded by proposing a voting rights bill that would deny state attempts to abridge the right to vote. The resulting legislation denied the use of literacy tests in locations where black registration or voting had been less than 50 percent in 1964’s presidential election. These areas included the states of Alabama, Georgia, Louisiana, Mississippi, South Carolina, and Virginia, as well as forty counties in North Carolina. In addition, the act gave the Attorney General the power to send in federal examiners into areas to ensure that eligible individuals were registered to vote or observers to oversee federal elections.

In addition, the act required that changes in voting practices (such as the drawing of district lines) in the states of Alabama, Alaska, Georgia, Louisiana, Mississippi, South Carolina, and Virginia, along with counties or parts of Arizona, Hawaii, Idaho, and North Carolina had to be submitted for ‘‘preclearance,’’ or approval, from either U.S. Attorney General or to the U.S. District Court for the District of Columbia. On being challenged in court, the U.S. Supreme Court ultimately upheld the constitutionality of the act in South Carolina v. Katzenbach, 383 U.S. 301 (1966) by saying that ‘‘After enduring nearly a century of systematic resistance to the Fifteenth Amendment, Congress might well decide to shift the advantage of time and inertia from the perpetrators of the evil to its victims.’’

With Congress passing extensions in 1972, 1975, and 1982 of the act, additional minorities were included under the protection of the federal government. Hispanic, Asian, and Native American citizens had protections added to prevent voting discrimination as well. The 1982 amendments included arrangements for areas to terminate, or ‘‘Bail out’’ of, being covered by the act’s requirements. In 2007, some sections of the act, most notably section five dealing with ‘‘preclearance,’’ will be up for renewal by Congress.

The Voting Rights Act has been credited with being an instrumental force to increasing minority participation in the democratic process, from voting to office holding. For example, in March 1965, only 6.7 percent of blacks in Mississippi were registered. By 1998, more than 70 percent of blacks were registered. In 2001, seven of the top ten states with the most elected black officials were in the South, with again Mississippi leading the nation with most elected black officials (892).