Noted constitutional scholar Laurence Tribe was born in China to Russian-Jewish parents in 1941. At the age of five he moved with his family from China to San Francisco. In 1962, he earned an A.B. in mathematics from Harvard College and four years later he earned a Juris Doctorate from Harvard Law School. From 1966 to 1967, he was a law clerk for California Supreme Court Justice Mathew Tobriner, and from 1967 to 1968, he clerked for U.S. Supreme Court Justice Potter Stewart. Tribe began his teaching career at Harvard Law School in 1968 and since 1982 has been Ralph S. Tyler, Jr., Professor of Constitutional Law. 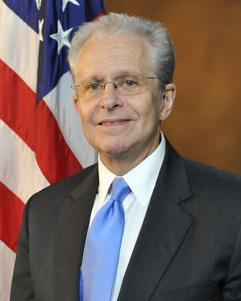 Richmond Newspapers v. Virginia (1980) focused on the First and Sixth Amendments. In this case the Court held that the public and the media have the right to attend criminal trials. Tribe argued the cause for the respondents in Pacific Gas & Electric Co. v. California Energy Resources Conservation & Development Commission, establishing that a state has the right to restrict nuclear power plants. He also argued for the constitutional right for homosexuals to engage in consensual sodomy, which the Court denied in Bowers v. Hardwick. The Court would later make the controversial decision to overturn this ruling in Lawrence v. Texas (123 S.Ct. 2472, 2003).

Tribe has appeared before the Court in other cases involving abortion and the right to die. In Rust v. Sullivan (1991), he argued, albeit unsuccessfully, that the Department of Health and Human Services had violated the First and Fifth Amendments of those who give and receive family planning services because it restricted recipients’ ability to offer abortion-related services. The Court ruled the department was not in violation of the amendments and relegated the decision of dispersing funding to the department. In Vacco v. Quill (1997), Tribe challenged the constitutionality of New York’s ban on physician-Assisted Suicide. The Court, using a rationality test, ruled that New York was not in violation of the equal protection clause.

Bush v. Gore (2000), the presidential election controversy over the legitimacy of Florida voting ballots, is another noteworthy case argued by Tribe before the Supreme Court. Attorneys for George W. Bush contended that the Florida Supreme Court had exceeded its authority by extending the certification deadline for questionable ballots to be counted. They also asked for an end to the voting recount. The Supreme Court ruled against another recount of the ballots, validating the contested recount as it stood with then Governor George W. Bush as the winner of the election.

Tribe has also written on the issue of abortion in his book, Abortion: The Clash of Absolutes (1990). He believes that abortion is a constitutionally protected right. However, in this book, he examines the prochoice and pro-life debates in an attempt to find strengths and weakness in both sides of the debate.

An established and highly sought-out legal scholar, Tribe has assisted in the drafting of constitutions for South Africa, Russia, the Czech Republic, and the Marshall Islands. His career includes that of author, attorney, Supreme Court advocate, and professor. His expertise and research interests span a wide range of topics such as constitutional law, abortion, federalism, free speech, privacy, church and state, and states’ rights.