William Howard Taft, the twenty-seventh president of the United States and chief justice of the U.S. Supreme Court, was born to Alphonso Taft and Louisa Maria Torrey in Cincinnati, Ohio. Taft, the only person to have been U.S. president and Supreme Court chief justice came from a politically involved family; Alphonso Taft served as secretary of war and attorney general during Ulysses S. Grant’s presidency. Taft graduated second in his class from Yale University in 1878 and then graduated from the Cincinnati Law School in 1880. Shortly thereafter, he was admitted to the Ohio bar, began practicing law, and became involved in politics. In 1886, Taft married Helen Herron; the couple had three children. 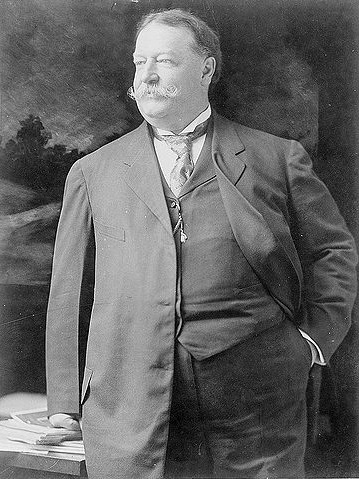 Prior to his presidency and chief justice positions, Taft held numerous public offices. He served as collector for the internal revenue service; judge for the superior court of Ohio; federal circuit judge; solicitor general during Benjamin Harrison’s presidency; president of the Philippine Commission; and secretary of war during Theodore Roosevelt’s presidency. Taft and Roosevelt had a strong friendship that led to Roosevelt’s support of Taft running in the 1908 presidential election against Democratic nominee William Jennings Bryan. Roosevelt had decided not to run, but expected Taft to continue reforms similar to his own. The Republican successor, however, changed the cabinet, and it soon became obvious that Taft and Roosevelt had different views of the scope of presidential power. Roosevelt believed in expanding the powers of the president, while Taft thought presidential authority, as granted in the Constitution, should be interpreted more narrowly.

This fundamental difference in constitutional interpretation of the presidential office caused the two to clash. Although Taft was committed to some of Roosevelt’s reforms, such as conservation and regulatory changes, he did not expand his executive powers to accomplish the revisions. Overall, he was a hard worker and had multiple accomplishments as president, such as the Mann–Elkins Act, passed in 1910, which regulated railroads, and he encouraged strong enforcement of antitrust laws. His foreign policy called for ‘‘dollar diplomacy,’’ which promoted American business to invest in Latin America and Asia, in order to foster the development of stable governments in those areas. Despite his efforts, the 1910 elections resulted in a Democratic majority in the House and a smaller Republican majority in the Senate. As time passed, Taft and Roosevelt became even more polarized from each other; a split in the Republican Party occurred when Roosevelt formed the Progressive Party in 1912. Taft lost the 1912 election to Democratic candidate Woodrow Wilson.

After his term as U.S. president, Taft taught at Yale as the Kent Professor of Constitutional Law, and wrote and lectured about his presidency and his views of presidential authority, which culminated in his 1916 book Our Chief Magistrate and His Powers. Staying active in politics, he became joint chairman of the National War Labor Board and was committed to the League to Enforce Peace. The former president also was active in the effort to ratify the Versailles Treaty.

Throughout his career, Taft possessed conservative views and held a deep regard for the separation of powers among the three branches of government and for federalism. This would become even more apparent when he served as chief justice of the U.S. Supreme Court from July 11, 1921, to February 3, 1930. The Taft Court was known for reorganizing the Court system with the passage of the Judges Act of 1922 and the Judges Act of 1925; favoring the protection of property rights, in American Steel Foundries v. Tri-City Central Trades Council (1921), Truax v. Corrigani (257 U.S. 312, 1921), and United Mine Workers of America v. Coronado Coal Company (268 U.S. 295, 1922); and favoring a broad application of the Interstate Commerce Clause in Stafford v. Wallace (1922) and City of Chicago Board of Trade v. Olsen (1923). In Bailey v. Drexel Furniture Company (1922), Taft and the court recognized limits of congressional authority when it overturned a law that taxed interstate commerce goods manufactured by children. Taft dissented, however, in the Court’s ruling to overturn a minimum wage law for women in Adkins v. Children’s Hospital (261 U.S. 525, 1923). In Myers v. United States (1926), the chief justice wrote the majority opinion, sanctioning the president’s right to fire employees of the executive branch.

The Taft court ruled conservatively in civil liberty cases such as Buck v. Bell (274 US 200, 1927), which upheld a statute that enforced sterilization of the mentally handicapped, and Olmstead v. United States (277 U.S. 438, 1928), which permitted the tapping of telephone lines of suspected violators of the National Prohibition Law. Particularly, Taft’s majority opinion in Olmstead demonstrated his perception of the Fourth Amendment. The Olmstead case arose during Prohibition when authorities suspected Roy Olmstead of bootlegging. To gather evidence, federal agents placed wiretaps on telephone lines in the basement of Olmstead’s office and on nearby streets. The information obtained from the taps served as evidence to convict Olmstead; the case went to the Supreme Court as possible violations of the Fourth and Fifth Amendments.

Relying on earlier Supreme Court rulings, Taft wrote that the wiretap did not violate the defendant’s rights. He claimed that Olmstead voluntarily had phone discussions and therefore an infringement of the Fifth Amendment did not occur. Taft also believed in a strict understanding of the Fourth Amendment, in which an unlawful search and seizure could not be applied to information gathered solely from sight or hearing. Rather, a violation came from an unwarranted search and seizure of the body or physical property, which did not include phone lines. Although Taft acknowledged the ethical concerns of wiretaps, he declared that Congress could pass a law regarding such issues; until then the Supreme Court would follow the common law that accepted evidence even if it was obtained unethically. A 1967 ruling in Katz v. United States (389 U.S. 347, 1967) reversed the Olmstead decision.

Taft’s most personally fulfilling years were when he was Supreme Court chief justice, but he retired from the position in part because of his ill health. A month after his retirement, he died in Washington, D.C., ending an impressive career as a public servant.