Charles Sumner—legendary Senator from Massachusetts, antislavery leader, and civil rights activist—was born in Boston on January 6, 1811. His parents, Charles Pinckney Sumner, a graduate of Harvard College who studied law under Josiah Quincy and became sheriff of Suffolk County in 1826, and Relief Jacob, a seamstress, were both descendants of Puritan settlers who arrived in Massachusetts Bay in the 1630s. They had nine children, including Charles and his twin sister Matilda. Sumner remained a bachelor until 1866 when he married Alice Mason Hooper, a wealthy young widow. The childless couple separated within a year and divorced in 1873. 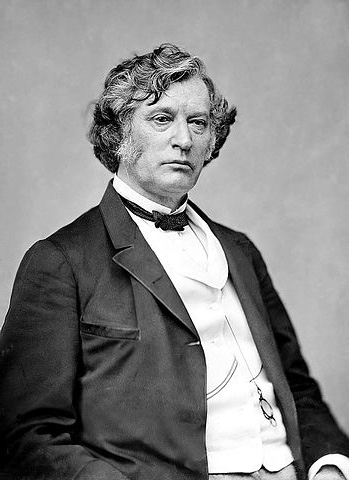 Charles received his early education from an aunt who taught the Sumner children in their home. At the age of ten, he entered the Boston Latin School where he delighted in reading the classics. He attended Harvard College from 1826 to 1830. He was an average student and never ranked in the top third of his class. He had difficulty in mathematics but enjoyed public speaking. In 1831, Sumner entered Harvard Law School. He studied under Joseph Story and became the Supreme Court Associate Justice’s favorite pupil. Completing his coursework in 1833, Sumner received his Bachelor of Laws and was admitted to the bar in 1834. In the same year, he visited the South for the first time and remarked on the harsh treatment of African Americans held in bondage in the nation’s capital. During the next three years, he practiced law with his friend and associate George S. Hilliard, acted as a Federal Circuit Court Reporter, lectured at Harvard Law School, and edited The American Jurist. In late 1837, Sumner embarked on a twenty-month European tour.

Returning to America in 1840, Sumner signed a contract to edit twenty volumes of Francis Veysey’s chancery reports and plunged into a wide range of civic activities. He joined forces with William Ellery Channing, the untiring Boston reformer, and became an outspoken advocate of penal reform and a leader in the city’s antislavery movement. Sumner demanded that the federal government outlaw slavery in the District of Columbia and the territories, eliminate the coastal and interstate slave trade, and repeal the Fugitive Slave Law. He joined the Emigration Society, supported Horace Mann’s drive for educational reform, and became involved in the American Peace Society. In 1845, he delivered a Fourth of July oration entitled ‘‘The True Grandeur of Nations’’ in which he called for international peace and the moral elevation of man.

In the mid-1840s, Sumner became an outspoken Conscience Whig and attacked fellow Whigs with ties to textile manufacturing, who failed to support the antislavery cause. He railed against alliances between ‘‘the lords of the lash’’ and ‘‘the lords of the loom.’’ He denounced the annexation of Texas as a scheme to expand the power of slaveholders, and he opposed the Mexican War. As the leader of the Conscience Whigs in the late 1840s, he was instrumental in forging an alliance with Free Soilers and antislavery Democrats, which later contributed to his election to the United States Senate.

In 1849, Sumner pleaded hismost famous legal case. In Roberts v. City of Boston (1849), he represented the parents of a five-year black student, Sarah Roberts, and challenged racial segregation inBoston’s schools. Arguing that separate could not be equal and emphasizing the adverse effects of segregated schools on both black and white children, Sumner presented arguments that were developed more than a century later in the landmark case of Brown v. Board of Education (1954).

In the early 1850s, Sumner took his antislavery campaign to the national stage. He attacked the constitutionality of the Compromise of 1850, including the new Fugitive Slave Law, which he considered a violation of the Fifth and Seventh Amendments guaranteeing life and liberty and the right to trial by jury. Elected to the United States Senate as a Free Soil senator in 1851, Sumner stepped up his attack on slavery by calling for the nullification of the Fugitive Slave Law. He emerged as a strong voice against any compromise on slaveholding, rejecting Stephen Douglas’s ‘‘popular sovereignty’’ and the Crittenden proposal. Sumner’s ‘‘Freedom National,’’ ‘‘Crime Against Kansas,’’ and ‘‘Barbarism of Slavery’’ speeches fueled an emotionally charged discourse against slavery. His branding of Senator Butler as the Don Quixote of slavery precipitated the infamous assault on him in the Senate by Senator Preston Brooks, Butler’s cousin and fellow South Carolinian. Brook’s caning of Sumner produced the campaign rhetoric ‘‘Bleeding Kansas Bleeding Sumner’’ in 1856. Despite an extended vacation, including time in Europe, Sumner never fully recovered from the physical and psychological effects of the attack by Brooks.

Appointed Chairman of the Senate Committee on Foreign Relations in early 1861, Sumner became a strong proponent of emancipation during the Civil War, arguing that freeing the slaves would mobilize support for the North in England and ensure peaceful relations with European powers. After President Lincoln’s Emancipation Proclamation, he joined with Elizabeth Cady Stanton and Susan B. Anthony to push for a complete abolition of slavery through constitutional amendment. He headed the Senate Committee on Slavery and Freedmen and supported the Thirteenth, Fourteenth, and Fifteenth Amendments, although he did not have a hand in drafting them. Embracing a political philosophy of ‘‘equality before the law,’’ he sought to remove restrictions on black testimony in federal courts and overturn the Supreme Court’s Dred Scott decision. He protested against the segregation of streetcars in Washington, D.C., and demanded equal pay for African-American troops. An outspoken Radical Republican, Sumner opposed President Johnson’s Reconstruction program and deplored the emergence of Black Codes in the South. He advocated congressional control of Reconstruction, advanced black suffrage as a condition for the reentry of seceded states, and sought to secure freedmen access to education and homesteads. He called for the enfranchisement of African Americans in the North and as a condition for the entry of new states.

Sumner’s stand on the ‘‘Alabama claims’’ against Britain and his opposition to President Grant’s proposed annexation of the Dominican Republic led to his alienation from the administration and most Republicans. Removed as chairman of the Senate Committee on Foreign Relations in 1871, he devoted the remainder of his career to civil rights. After his fourth failed attempt to push a comprehensive civil rights bill through Congress, he left the Republican Party and supported Horace Greely in the 1872 presidential election, distancing himself from many longtime supporters, including African Americans. After an unsuccessful attempt to mend fences with Republicans in 1873, he tabled his ‘‘battle flags resolution’’ calling for the removal of the names of battles with fellow citizens from the Army’s register, which resulted in his further alienation and a censure by the Massachusetts legislature. In his final years, he failed to obtain support for his civil rights bill, which he reintroduced in the Senate for the last time in December 1873. He demonstrated increasing sympathy for the political rights of women and supported Susan B. Anthony’s call for extending the vote to women. One hour before his death in Washington on March 11, 1874, he urged onlookers, including Frederick Douglass, to work for the passage of his civil rights bill.