Nadine Strossen, current president of the American Civil Liberties Union (ACLU) and constitutional lawyer, received her undergraduate degree from Harvard College in 1972, and she graduated from Harvard Law School in 1975. The ACLU elected Nadine Strossen to head the organization as its president in 1991, a post she still held as of 2004. Her election was seen as a return to the organization’s traditional emphasis on issues of civil liberties such as freedom of speech and freedom of the press. Strossen has repeatedly stressed that the organization’s top priority must be educating the public on these basic issues. 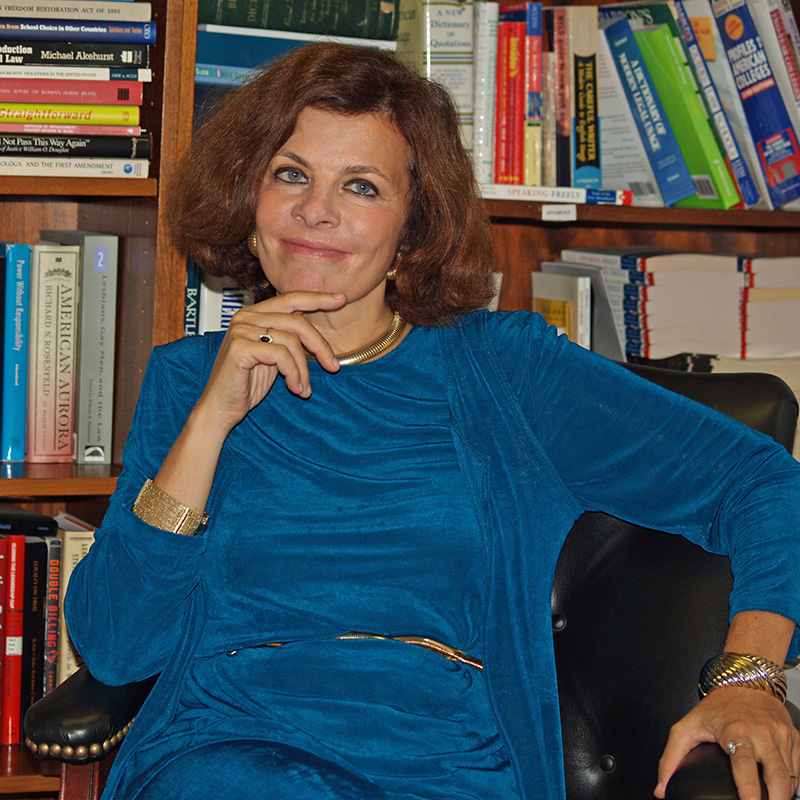 Nadine Strossen (1950&ndash;)Founded in 1920, the ACLU promotes itself as America’s ‘‘guardian of liberty,’’ with the job of conserving the United States’s original civil values. The organization and Strossen’s presidency emphasized the Bill of Rights and the Constitution, particularly focusing on First Amendment rights, equal protection under the law, due process, and right to privacy. The ACLU works to extend rights to segments of population historically denied them and handles thousands of cases yearly throughout the United States.

When elected, Strossen not only became the youngest person to head the organization at age forty, but she also became the first woman to head the nation’s oldest and largest civil liberties organization. Strossen is also a professor of law at New York University and practices constitutional law with special interests in civil liberties and international human rights. The National Law Journal has twice named Strossen one of its ‘‘100 Most Influential Lawyers in America.’’

Throughout her career, Strossen has been vocal on such intersecting issues as freedom of speech and women’s rights. In 1995, she wrote Defending Pornography: Free Speech, Sex, and the Fight for Women’s Rights, published by Scriber. The New York Times named it a Notable Book of 1995. In Defending Pornography, Strossen argued against ‘‘pro-censorship’’ feminist scholars such as Catharine MacKinnon and Andrea Dworkin, who call for the censorship of pornography as a violation of women’s rights. Strossen contends that the proponents of pornography’s censorship deliberately blur any distinction between erotica and pornography, terming all sexually explicit material as the same. Strossen argues that the Dworkin–MacKinnon model law should itself be considered censorship because its intent is ultimately to take material that fits its definition of pornography out of circulation.

Strossen contends that defending the freedom of sexual expression is essential for women’s rights advocates, and that while women need to protect themselves, they most need protection from governmental infringement on their freedom and autonomy, not protection from pornography. By equating sexual expression with gender discrimination, women’s equality is undermined by women being told they must choose between sexuality and a supposed ‘‘equality.’’ In the context of women’s rights, she argues that freedom of speech is consistently the strongest weapon for countering misogynist discrimination and violence. To counter the Dworkin–MacKinnon model, Strossen argues that from a women’s rights point of view, censoring pornography is damaging.

Strossen argues in Defending Pornography that regardless of the content of pornography and women’s opinion of it, it does more harm to women’s rights and free speech to censor pornography. Her argument defends the right of each individual to make one’s own decision about what to see—or what not to see—in the realm of sex. Strossen intended Defending Pornography as a response to her contention that the excessive media attention received by prominent feminists such as Dworkin and MacKinnon led people to believe all feminists must support the censorship of pornography. Ultimately, Strossen articulates that pornography means an expression intended to sexually arouse an individual, be it either print-based or visual, and that the Constitution protects such expression. Strossen also coedited the book Speaking of Race, Speaking of Sex: Hate Speech, Civil Rights, and Civil Liberties, in which her article ‘‘Regulating Racist Speech on Campus’’ appeared. Strossen expands on her argument that it is insulting to women, racial minorities, and ultimately, everyone, to argue that one must choose between freedom of speech and equal opportunity. She posits that the First Amendment’s free speech guarantee offers the greatest protection for women’s and minorities’ rights and safety. Free speech, under this argument, serves as an indispensable method to promote other rights and freedoms, with any regulation of speech potentially undermining both equality and free speech. The First and Fourteenth Amendments work as allies rather than antagonists, and equality is best served by continuing to apply traditional, speech-protective precepts to racist and misogynist speech rather than creating specific legislation to circumscribe it.