Lawyer, law professor and dean, associate, and then chief justice of the U.S. Supreme Court, Harlan Fiske Stone provided one of the key jurisprudential underpinnings that lie beneath modern civil liberties and civil rights law. Although normally considered a liberal, Stone’s record in civil liberties is mixed. 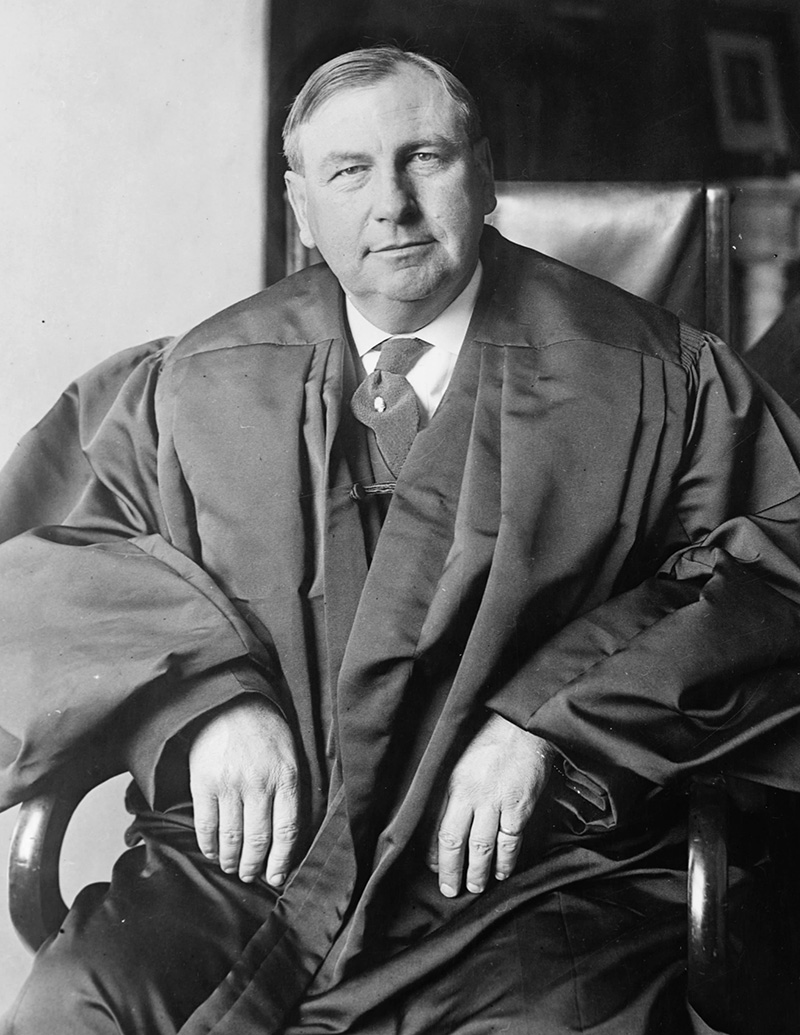 Harlan Fiske Stone (1872&ndash;1946)After graduation from Columbia Law School in 1899, Stone went into private practice in New York but returned to teach at Columbia and serve as dean in 1910. By all reports, an outstanding teacher and a competent administrator, Stone clashed constantly with the university’s autocratic president, Nicholas Murray Butler. In 1923, fed up with the battle, Stone returned briefly to private practice. The next year, however, his college friend, President Calvin Coolidge, asked him to become attorney general and to clean up the mess left by the Harding scandals, especially the problems at Justice created by Harry M. Daugherty. Stone succeeded so well in cleaning up the Justice Department and getting rid of Daugherty’s cronies that some Democrats believed his appointment in 1925 to the Supreme Court was sparked by the Republican party’s desire to have him ‘‘kicked upstairs.’’

Stone joined a bench headed by William Howard Taft, who believed in ‘‘massing the Court’’ and presenting a unified judicial front by discouraging dissenting or concurring opinions. Stone initially followed Taft’s lead, and critics quickly labeled him as a ‘‘safe Republican’’ and a cipher for Taft. But Stone, a moderate Republican, soon found the conservatism of the chief justice and the ‘‘Four Horsemen’’ (Pierce Butler, James McReynolds, George Sutherland, and Willis Van Devanter) too much, and he began to vote more and more with the Court’s two liberals, Oliver Wendell Holmes, Jr., and Louis D. Brandeis. In the 1920s, although he often voted in dissent with them, Stone rarely wrote the opinions. By the mid-1930s, however, with Holmes gone and Brandeis in decline, Stone found his voice. Although he privately opposed many of the New Deal measures, he believed in judicial restraint and wanted the courts to leave policy making to the elected branches. Stone was loathe to strike down a state or federal regulatory measure, but if the legislatures impinged on civil liberties, Stone thought the courts had a special obligation to protect citizen rights under the Constitution.

After the court-packing crisis of 1937, judicial opposition to the New Deal collapsed, and within a few years Franklin Roosevelt had made enough appointments to the bench so that one could talk about a ‘‘Roosevelt Court.’’ Around this time, the Court’s agenda changed. The economic regulation and property rights issues that had dominated the Court’s docket for a half-century gave way to questions of civil liberties which, it turned out, would prove even more divisive than had economic matters. Although the Roosevelt Court shared the view that in matters of economic regulation the judges should be restrained and defer to the elected bodies, issues such as freedom of expression, separation of church and state, and racial justice proved very hard to resolve.

In examining Stone’s civil liberties record by the late 1930s, one would have found him consistently voting for greater constitutional protection of free speech and press, but he had not, as yet, written any opinion or dissent in which he spelled out his views on these matters. The turning point came in an otherwise inconsequential case, United States v. Carolene Products Co. (1938). The case involved a federal law prohibiting the interstate shipment of ‘‘filled milk,’’ that is, skimmed milk mixed with animal fats. Stone, writing for the Court, sustained the statute, but then in a footnote—often called the most famous footnote in all Supreme Court history—he announced that although economic regulations of the sort at issue in the case would be subjected to a fairly low level of constitutional review, statutes dealing with civil liberties and racial issues would be subject to a far more searching examination by the Court. In other words, there would be a double standard: low level (or ‘‘rational basis’’) for economic matters, and a higher level (‘‘strict scrutiny’’) for matters touching on individual rights. The footnote encapsulated the economic self-restraint that had been identified with Holmes, Brandeis, and Stone and pointed the way toward the great civil rights and civil liberties opinions of the 1950s and 1960s.

Some commentators believe that the Carolene Products decision, and not the Court’s reversal in West Coast Hotel v. Parrish (1937), marks the great watershed between the ‘‘old’’ and the ‘‘new’’ jurisprudence. Stone himself wrote two opinions, one for the Court and the other a dissent, which epitomized the new jurisprudence. In United States v. Darby Lumber Company (1941), Stone dismissed a challenge to the 1938 Fair Labor Standards Act and essentially said that under the powers of the commerce clause, Congress had a wide range of discretion in which to act and that the courts would not second-guess legislative policy. The year before, Stone penned a dissent in the first flag salute case, Minersville School District v. Gobitis (1940) that, although practically overlooked at the time, proved a harbinger of the new jurisprudence.

In an eight-to-one decision written by Felix Frankfurter, the Court upheld a Pennsylvania law requiring the compulsory salute of the American flag at the beginning of each school day. Jehovah’s Witnesses had objected, claiming that the salute violated their free exercise of religion in that it forced them to symbolically ‘‘bow down to an idol’’ in defiance of God’s command. Stone was the only dissenter, and he finished his opinion late (Douglas later said that he and Black would have voted with Stone if they had had the time to see his opinion). In his dissent Stone wrote: ‘‘The guaranties of civil liberty are but guaranties of freedom of the human mind and spirit and of reasonable freedom and opportunity to express them . . . . If these guaranties are to have any meaning they must, I think, be deemed to withhold from the state any authority to compel belief or the expression of it where that expression violates religious conviction, whatever may be the legislative view of the desirability of such compulsion.’’

Stone’s argument, as well as the increase in attacks on Jehovah’s Witnesses as ‘‘unpatriotic,’’ led the Court to take on more Witness cases. In Jones v. City of Opelika (1942), the Witnesses lost a case challenging the constitutionality of a city license on their door-to-door proselytizing, but the vote was five to four. Not only did Stone dissent, but in a separate dissent Douglas, Black, and Frank Murphy announced that they believed their vote in Gobitis had been wrong. The following year the flag salute issue came back before the Court, and this time Stone’s dissenting view in Gobitis became the six-to-three majority view in West Virginia Board of Education v. Barnette (1943). Stone, who by then had been named by Roosevelt to succeed Charles Evans Hughes as chief justice, graciously allowed Robert Jackson to write the opinion, but Jackson’s wording, although more eloquent than that of Stone, nonetheless closely followed Stone’s reasoning in Gobitis.

Stone’s tenure as chief justice proved an unhappy period in his life as he tried to manage an increasingly fractious court. Even if the country had not been at war, the differing views and strong personalities of men like Frankfurter, Douglas, Black, and Jackson would have made it difficult to keep peace within the Court. The war not only exacerbated the problems but brought to the bench cases that in other times might well have been decided differently, especially the Japanese internment cases, in which the Roosevelt administration took 700,000 persons of Japanese ancestry— many of them native-born American citizens— from the West Coast and put them in inland concentration camps. The Court heard three cases on the matter, and in all of them Stone, despite his insistence in Footnote Four about the Court protecting ‘‘discrete and insular minorities,’’ backed the government program.

The first case to reach the Court, Hirabyashi v. United States (1943), tested the government’s curfew orders directed solely against those of Japanese descent. Stone strongly backed the government and used his influence to try to mass the Court in its behalf. He used the notion of judicial restraint to argue that in wartime the Court had no business second-guessing the civilian and military authorities responsible for the program. With Frankfurter and Black pressuring the brethren, Stone managed to get a unanimous Court to approve the curfew, but there were three concurring opinions, by Douglas, Murphy, and Wiley Rutledge, indicating that it would be harder to get unanimity in the next case.

The second case dealt not with the curfew but with the actual relocation. In Korematsu v. United States, 323 U.S. 214 (1944), Stone proved unable to get unanimity and found that some of his brethren were taking the lesson of Carolene Products far more seriously than its author. Stone assigned the opinion to Black, who like Stone and Frankfurter would not question the military in wartime, but despite their best efforts to achieve unanimity, three justices dissented, Roberts, Murphy, and Jackson.

The relocation cases have been considered a disaster and an embarrassment for the Court ever since and have done a great deal to tarnish Stone’s reputation as a civil libertarian. The third case, Ex parte Endo (1944), unanimously held that a citizen whose loyalty had been proven could not be kept incarcerated. By then the tide of war had significantly changed, nonetheless Stone sat on release of the opinion until after the 1944 election so as not to embarrass the president.

Stone showed similar deference to the government in a series of Denaturalization cases in which the government tried to strip Citizenship from naturalized citizens whom it considered disloyal. In most of these cases, Stone wound up on the losing side, as in Schneiderman v. United States (1943). The majority held that as a naturalized citizen Schneiderman enjoyed all the rights of Citizenship and could not be punished for unpopular views. Stone’s dissent sounded very strange coming from the man who had been the sole dissenter in the Gobitis case, for now he said that constitutional rights could be restricted when the government deemed it necessary. Even in the effort to deport West Coast labor leader Harry Bridges (Bridges v. Wixon [1945]), Stone conceded that Congress had attempted to do a ‘‘rotten thing,’’ but nonetheless in his dissent held that it had the power to do so.

After the capture of the eight Nazi saboteurs, the president ordered a military tribunal to try them in secret. At first the Court planned not to interfere, but Justices Roberts and Black, after meeting with the defendants appointed counsel, decided that the Court, in the name of the rule of law, had to at least hear the case. It was immediately apparent that all nine of the justices would vote to uphold the military tribunal, but they could not agree on a common reasoning. In Ex parte Quirin (1942), the Court handed down its decision within a few days of hearing oral argument; Stone’s written opinion did not come down until four months later. In it he essentially denied any protection of the Constitution to enemy combatants and gave the president broad authority to decide when military tribunals should be established and who should be tried there.

In sum, Harlan Stone’s record on civil liberties remains mixed. His Footnote Four provided the basis by which later courts would be able to expand judicial protection of civil liberties and civil rights, yet except for his defense of the Jehovah’s Witnesses, Stone himself seems to have ignored the explicit promise of that statement.