Elizabeth Cady Stanton was the chief feminist and legal philosopher of the nineteenth-century women’s movement. Her work catalyzed the demand for civil, political, and social rights for women. Although best known today for her work on behalf of women’s suffrage, Stanton advanced a broad platform of civil liberties for women as individuals and citizens, which she argued were distinct from their incidental relations of wife and mother. She sought equal rights for women in marriage and divorce, employment, and education. In addition, she advocated for the reciprocal obligations of Citizenship for women, seeking the right of women to sit on juries and to own the marital property for which they were taxed. The vote, for Stanton, was simply one mechanism to obtain a voice for women with which to alter the existing legal and social structure. 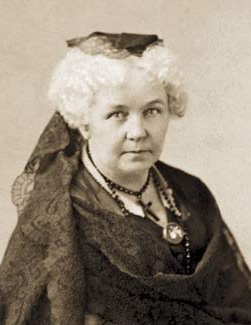 Stanton’s holistic approach to legal and social liberties grew out of her own experiences. Born on November 12, 1815, in Johnstown, New York, Stanton was the daughter of lawyer and jurist Daniel Cady. Under the tutelage of her father and the law apprentices he trained, Stanton obtained a de facto legal education. In her father’s law office, she experienced the injustices of women clients under the law of coverture that denied any legal existence or rights to married women. Educated more than most women of the day, Elizabeth Cady continued to study law with her father until the age of twenty-five when she married abolitionist and lawyer, Henry B. Stanton. Elizabeth had seven children, five boys and two girls, for whom she assumed primary parenting responsibility, because Henry worked away from home for most of their marriage. Stanton dabbled in temperance and abolition reforms, but always as they related to her prime concern of women’s rights. She was a brilliant, witty, and engaging woman who used speeches, political conventions, and written articles to advance women’s rights. Her newspaper, The Revolution, published from 1869 to 1871, and her eleven years as a lecturer on a national tour, made Stanton a household name as the leader of the women’s rights movement.

Stanton’s first and most famous act occurred in July 1848 at Seneca Falls, New York, where she organized the first convention on women’s rights and drafted its Declaration of Sentiments for women’s rights. Analogizing to the Declaration of Independence and playing on the accepted rhetoric of the time of women as sentimental rather than rational creatures, Stanton drafted a legal text calling for systemic legal change to break down the patriarchal structure and create civil liberties for women. Her calls for equality in marriage and divorce, property rights for married women, and access to education and employment were unanimously accepted by the convention; only the demand for the vote for women was seen as extreme and even laughable.

Three years later, Stanton teamed up with Susan B. Anthony and together they promoted the right of women’s suffrage. After the Civil War, Stanton and Anthony’s demand for the vote for women became more radical as they opposed the Fifteenth Amendment enfranchising African-American men. Their opposition stemmed from the passage of the Fourteenth Amendment and its inclusion of language restricting the new civil rights to ‘‘male citizens.’’ Stanton rebelled against this ‘‘aristocracy of sex’’ and the betrayal by abolitionist colleagues who had previously worked together for equal suffrage regardless of race or sex. Stanton’s opposition to the Fifteenth Amendment, sometimes couched in vitriolic and racist language, alienated her abolitionist colleagues and led, in part, to the division of the women’s political movement into Lucy Stone’s conservative American Woman Suffrage Association and Stanton and Anthony’s more radical National Woman Suffrage Association.

Although the women’s movement narrowed in on the right to vote, Elizabeth Cady Stanton continued her broader social agenda of reforming the rights of women within the family. She used arguments from the realm of political liberty and religious tolerance to make the case for individual autonomy and choice in private life. The true focus of reform, she said, was on the marriage relation. Stanton attacked the denial of married women’s property rights that were an important component of full Citizenship rights in the United States. She advocated for a partnership theory of marriage that encompassed marital property rights, the elimination of dower, and access to divorce. Stanton saw divorce as the escape route for women from marriages dominated by intemperance, Domestic violence, and patriarchy, and thus argued for reform of divorce laws to permit no-fault divorce for the incompatibility of the partners. In the late nineteenth century, Stanton actively opposed the attempts at a constitutional marriage amendment that would have allowed for a national law restricting the right of divorce. In addition, Stanton attacked the symbolic denial of women’s liberties in marriage, calling for women to retain their own name at marriage and to refuse to promise ‘‘to obey’’ their husbands in the wedding ceremony. Although Stanton argued for equality of women in the marriage partnership, she focused on a maternal difference to argue for a mother’s preference in the custody rights of children on separation or divorce of the parents. At the time, children were legally the property of the father, who was awarded custody of the children regardless of the circumstances of the separation.

In 1889, after decades of feminist agitation, Stanton confronted the core issue that seemed to be the stumbling block for all reforms she sought—the then-accepted biblical commands of women’s subordination. Stanton challenged these patriarchal notions by rewriting the Bible with a feminist lens to reveal a Christian theology grounded in equality of genders and individual empowerment. It was this perceived attack on the Bible that resulted in Stanton’s ultimate ostracism from the women’s movement and from history.

Elizabeth Cady Stanton’s work foreshadowed the legal rights that women would ultimately obtain by the late twentieth century. Stanton’s legacy is the holistic vision of civil rights as a combination of the norms of law, society, and religion as necessary to achieve individual liberty and autonomy for women.