Lemuel Shaw, nineteenth-century jurist, was born to a Congregationalist minister in Barnstable, Massachusetts, on January 9, 1781. Shaw learned English and how to read the Bible as he helped to maintain the farm in the small town. In 1795, he left his family’s farm to prepare for Harvard College. Failing his initial college entry examination, Shaw passed on his second try and was admitted to Harvard in 1796 and graduated in 1800. After college, Shaw became a schoolteacher and prepared for a legal career under the tutelage of attorney David Everett and his law partner Thomas Selfridge. 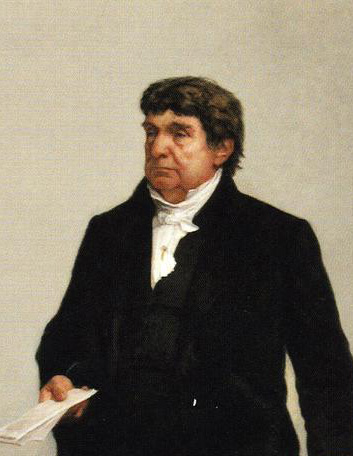 In 1804, he was admitted to the New Hampshire and Massachusetts bars, which would be the start of a career as a prominent figure in the American judicial system, particularly Massachusetts. Soon after admittance to the bar, he began to practice law in Boston. He was a Federalist in the Massachusetts House of Representatives from 1811 to 1814, 1820, and 1829. He served in the state Senate from 1821 to 1822 and was a delegate to the Massachusetts state convention of 1820–1821.

Shaw, who helped structure the first Boston charter in 1821, would later become chief justice of the Massachusetts Supreme Court from 1830 to 1860. It was in this capacity that he made monumental legal decisions that shaped the American judicial system, particularly Massachusetts. Several of Shaw’s notable cases include Commonwealth v. Hunt (1842), Roberts v. City of Boston (1849), Commonwealth v. Alger (1851), and Brown v. Kendall (1850).

Before Commonwealth v. Hunt, workers were not legally allowed to organized to improve their working conditions. In 1840, seven shoemakers were charged with organizing themselves to extort money from their employer. Guided by precedents set in the 1349 English Statute of Labourers, labor unions were viewed as criminal. In Hunt, Shaw abandoned this perception and found that members of labor unions were not engaging in criminal behavior and conspiracies against their employers when they sought better work conditions.

Shaw’s ruling in Roberts v. City of Boston also would be influential. The case outlined the judicial framework for legalized segregation that would later be adopted in Plessy v. Ferguson (1896). Five-year-old Sarah Roberts, after four attempts, was barred from attending the local school because of her color, and her father, Benjamin Roberts, sued the city arguing that it was in violation of the 1845 Boston statute that made any child excluded from public instruction eligible to recover damages. The Court ruled that the issue of race was not perverted, because the case hinged on the school committee’s power to use its judgment to control itself, which included authority to maintain a system of separate white and black primary schools.

Another of Shaw’s rulings, Commonwealth v. Alger, has been instrumental in shaping and defining constitutional law and police authority. The case stemmed from an indictment of a defendant who built a wharf that extended beyond the boundary set by Boston legislators. Shaw ruled that in certain circumstances, government had the right to regulate private property. The government had the right to protect and promote the general public welfare, and to do so boundaries and limitations on private property could be imposed. Furthermore, the ruling held that the state had the right to reasonably restrict an individual’s use of private property for the benefit of the good of the general public and the right to enforce the state’s restrictions.

Chief Justice Lemuel Shaw of the Supreme Court of Massachusetts was arguably the most influential figure in the American judicial system in the midnineteenth century. He is often viewed as a pillar in American legal history, writing more than 2,000 opinions during his career. Shaw died in Boston on March 30, 1861, after an extensive legal career that still affects modern law and times.