Antonin Scalia was appointed an Associate Justice of the Supreme Court in 1986 by President Reagan and in the years since has become the nation’s most powerful voice for the view that the Constitution should be interpreted as originally understood at the time of enactment. Justice Scalia has earned a reputation as a brilliant thinker, but his caustic lectures on constitutional theory often appear in dissent as his colleagues apply an ever-changing interpretation of the Constitution to adapt the document to modern society. Justice Scalia’s talent for turning a phrase in his opinions is rivaled only by that of Chief Justice Marshall, Justice Holmes, and Justice Jackson, but Justice Scalia’s quips are often personally directed at his colleagues, demonstrating his impatience with what he perceives as their lawmaking-concealed-asconstitutional interpretation. 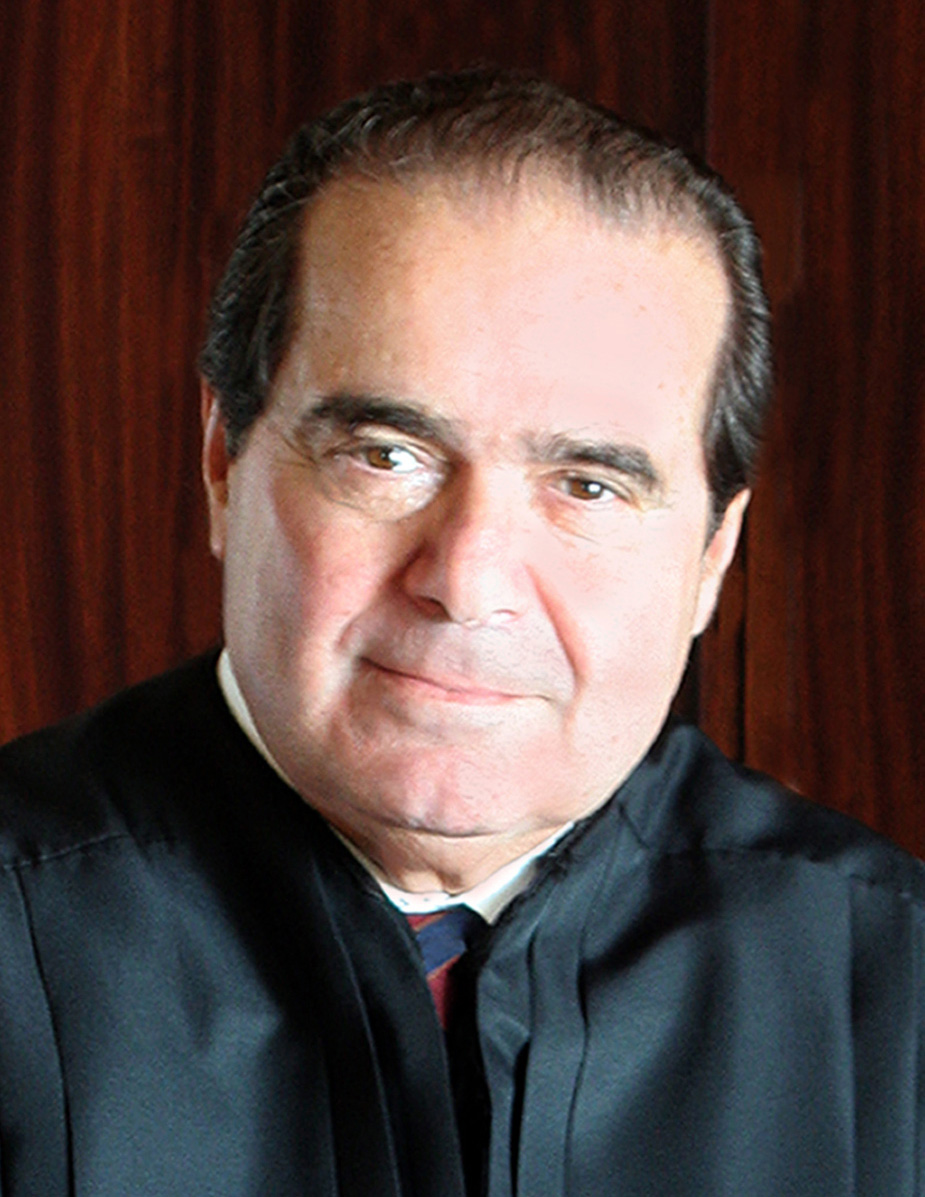 Antonin Scalia (1936&ndash;)Antonin Scalia was born March 11, 1936, in Trenton, New Jersey. For most of his youth he lived in Queens, New York, where he moved to at age five. After studying at Georgetown University and the University of Fribourg (Switzerland), he enrolled in the Harvard Law School, graduating there in 1960 having been an editor of the Harvard Law Review. After completing his schooling, Justice Scalia practiced law in Cleveland, Ohio, and then became a law professor, specializing in administrative law. In 1971, Justice Scalia entered government service as general counsel of the Office of Telecommunications Policy. He subsequently became chairman of the Administrative Conference of the United States and Assistant Attorney General for the Office of Legal Counsel. In 1982, President Reagan nominated Scalia to serve on the United States Court of Appeals for the District of Columbia Circuit. He served in that position until 1986, when Reagan selected him for the position of Associate Justice of the Supreme Court, filling the seat of William Rehnquist, whom Reagan elevated to Chief Justice to replace Warren Burger.

Applying his view that the original understanding of the Constitution is informed by historical practice, Justice Scalia has pointed to the national government’s frequent involvement with religion since 1791 and has been reluctant to find violations of the Establishment Clause when the government in some way expresses particular respect for religion. Sometimes his position has commanded a majority of the Court, as in some cases where the Court has allowed funding of nonreligious activities at religious locations. (See, for example, Zelman v. Simmons-Harris; Zobrest v. Catalina Foothills School District, 509 U.S. 1 [1993].) Other times he has not been so successful. He would allow public prayer at graduations and other public events, concluding that such exercises do not coerce nonbelievers to participate. Other members of the Court disagreed, however, and have held that such exercises can convey a message that only persons of a preferred faith are fully welcome in the political community (Lee v. Weisman; Santa Fe Independent School District v. Doe). Responding to the majority of the Court’s suggestion that graduation prayers were indeed coercive, Justice Scalia mocked their reasoning, calling it ‘‘psychology practiced by amateurs.’’

In contrast to the Establishment Clause, where Justice Scalia has found himself as often as not protesting from the sidelines, the free exercise clause was revolutionized by one of Justice Scalia’s majority opinions, Employment Division, Oregon Department of Human Resources v. Smith. In that case, Justice Scalia held that a state need not make exceptions to ‘‘neutral laws of general applicability’’ for violators who were religiously motivated. In Smith, for example, Justice Scalia held that Oregon could punish an American Indian for ingesting peyote, a hallucinogenic drug, even when the individual took the drug as part of a religious ceremony. The policy against drug use was ‘‘neutral’’ and ‘‘generally applicable’’ in that it prohibited everyone from ingesting the drug—not just those who used it as part of a religious exercise. As a result, Oregon did not need to make any exception for Mr. Smith. Because of the Smith decision, states may exempt religious worshippers from some restrictions, but they are not forced to do so, as long as the restriction has not singled out religious worship and treated it worse than comparable secular actions.

Where a right does appear in the Constitution, however, Justice Scalia enforces the right, often with vigorous rhetoric, against legislative majorities. Particularly noteworthy in this regard is Justice Scalia’s solicitude for certain rights of criminal defendants. Although certainly not a liberal in criminal cases, he sided with the defendant in only 25.3 percent of criminal procedure cases through the 2001 term. According to The Supreme Court Compendium, Justice Scalia has not hesitated to write strong opinions protecting the rights of those accused of crimes when the claimed rights are reflected in Anglo-American legal history and the text of the Constitution. As examples, the Justice has been at the forefront of the recent controversy in which the Court has held by five-to-four margins that the accused has the right to have a jury—rather than a judge—find every fact that determines the sentence to which he will be subject (United States v. Booker; Blakely v. Washington). In addition, Justice Scalia has protected criminal defendants’ right to confront the witnesses against them, even as a majority of the Court was willing to make an exception to allow child abuse victims to testify by closedcircuit television (Maryland v. Craig). He has also written opinions protecting Fourth Amendment rights, although only so far as those rights find support in analogous historical practice. Compare, for example, his opinions in Kyllo v. United States (protecting the right against warrantless searches of the home); Arizona v. Hicks (same); and Thornton v. United States (opining that the Court should rethink its decisions allowing the police to search vehicles without probable cause after the suspects have been removed), with California v. Acevedo (arguing that the government should be able to make warrantless searches of personal effects carried in public) and California v. Hodari D. (holding that a suspect is not ‘‘seized’’ within the meaning of the Fourth Amendment until he is physically restrained or submits to authority).

Justice Scalia has also been open to claims based on the Free Speech Clause of the First Amendment, although the original understanding of the clause seems much less protective of speech than are many of the Justice’s opinions. He has embraced doctrine forbidding the government from punishing speech with which it disagrees, as illustrated by his joining the majority in Texas v. Johnson, which reversed the conviction of a protestor who burned the American flag. He also supports free-speech rights in the area of campaign finance, causing him to dissent in a series of cases upholding campaign finance regulation, culminating in McConnell v. Federal Election Commission. On the other hand, Justice Scalia is occasionally accepting of government actions that burden speech if he can point to a tradition accepting such deprivations, as he has with regard to patronage-based personnel decisions, where the officials in power would reward supporters with jobs formerly held by political opponents (O’Hare Truck Service v. City of Northlake; Rutan v. Republican Party). Although successive Supreme Court majorities have condemned discrimination on grounds of political affiliation in hiring, firing, and contracting decisions by state and local governments as inconsistent with the First Amendment, Justice Scalia would uphold it, because it has been practiced for centuries, apparently only recently being considered by many to be a constitutional violation.

In cases interpreting statutes, Justice Scalia is a ‘‘textualist.’’ He interprets the statute based primarily on what the statute says (read in its context, to be sure), rejecting legislative history as an unreliable indicator of what the statute means. In Justice Scalia’s view, legislative history—materials such as debates and committee reports—is often unread by the legislators themselves and in any event may represent only a minority position among those legislators who voted for the law. Justice Scalia points out that only the law as passed by Congress and signed by the president is law, and concludes from this that courts should rely on the text of statutes to discover statutory meaning.

Throughout his jurisprudence, Justice Scalia has sought to limit the discretion of courts. He wishes to limit judges to the text of statutes and the original understanding of constitutional provisions, so that they do not overreach into policymaking. Justice Scalia’s distrust of the judiciary is evident most directly in his support for doctrines that prevent the courts hearing cases at all. In cases such as Lujan v. Defenders of Wildlife, he has championed the renaissance of the ‘‘standing’’ requirement, under which courts will not hear a case unless it is brought by a person who is personally harmed by the action he seeks remedied. He has also supported a vigorous use of the ‘‘political question’’ doctrine, according to which a court will not hear a case if there are no judicially manageable standards for deciding it (Vieth v. Jubelirer). In other words, if courts cannot create a remedy for a violation of law, then they have no business hearing the case.

If courts cannot hear cases under these theories, the result is that the executive has more discretion to act, because the judiciary will not be watching over his shoulder. And giving more power to the executive is something Justice Scalia has found very appealing. Most famously, he dissented when the rest of the Court upheld the constitutionality of the so-called independent counsel, whose job it was to investigate and, if appropriate, prosecute violations of the law by executive officials. Justice Scalia thought the independent counsel was an unconstitutional interference with the president’s ability to execute the laws (Morrison v. Olson). Justice Scalia also dissented when the Court struck down the Line-Item Veto Act, which would have permitted the president to cancel certain items of spending from the budget, without having to obtain Congress’s approval.

Through his tireless advocacy for originalism and textualism, Justice Scalia has been an incredibly influential force on American law. Judges and litigators now take arguments based on text and original understanding seriously, even in those areas where Justice Scalia is predictably in dissent. Only time will tell whether the justice will ultimately triumph in advancing his ideal of a Constitution whose principles are static and enduring.