Margaret Sanger is widely considered to be the founder of the American Birth Control movement and a driving force behind the development of modern contraceptives. Sanger emphasized Birth Control and family limitation as a means through which women could determine their own lives and protect their health, as well as an issue that was intrinsically linked to general public health social equality. Her campaigns to disseminate accurate information about and increase access to contraceptives often ran afoul of government censorship and social strictures of her time. 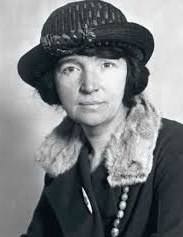 As a nurse and midwife on New York City’s Lower East Side, Sanger was profoundly influenced by the destitution and high birth rates among the women with whom she worked. These experiences reinforced Sanger’s childhood experiences. The sixth of eleven children in a working class Irish-American family, Sanger believed that the toll of so many pregnancies had contributed to weakening her mother’s body and to her succumbing to an early death from tuberculosis. Sanger also observed as a child that local workingclass and poor families were often larger than their well-off neighbors, a condition she believed perpetuated poverty, illness, and hunger. Frustrated by her inability to help her patients control their own fertility and, in some cases, avoid life-threatening pregnancies, Sanger resolved to leave nursing and in favor of advocacy.

In 1912, Sanger began writing for the socialist paper The Call. Her column on sex education, ‘‘What Every Girl Should Know,’’ discussed contraception, sexually transmitted diseases, menstruation, and other traditionally taboo topics. In 1914, Sanger began publishing her magazine The Woman Rebel and soon was arrested on criminal charges for violating New York’s Comstock law, which forbade sending ‘‘obscene’’ materials through the mail. To avoid a lengthy jail term and the interruption of her work, Sanger fled to England, where she continued researching Birth Control advances and policies. On her return to the United States in 1916, Sanger and others opened the nation’s first Birth Control clinic, a direct challenge to the Comstock regulations. The clinic remained open for ten days before Sanger and her cofounders were arrested.

Although Sanger served jail time, the resulting case was a partial victory. On appeal, the state law was interpreted to allow doctors to give contraceptive advice to married women for whom pregnancy might endanger their health. Sanger focused subsequent lobbying on winning support for Birth Control from the medical profession, social workers, and the liberal wing of the eugenics movement. This increased emphasis on the medicalization of Birth Control was evident in her championing the medical prescription of the diaphragm and her helping to open a clinic in 1923 that not only dispensed information to individual women but also served as an educational venue for physicians. Physicians were among those who defended Sanger after her clinic was raided in 1929, criticizing the police for interfering with the privacy of the doctor–patient relationship.

In 1921, Sanger founded the American Birth Control League, which would later become the Planned Parenthood Federation of America, a national lobbying and educational clearinghouse organization. The league was often frustrated as it pressed for legislative change, although it saw measured success through litigation, as multiple cases over many years gradually eroded restrictions on the dissemination of Birth Control information in the United States. Sanger also consistently advocated for the development of simpler and more affordable contraceptives. She helped arrange for the American manufacture of diaphragms she had been smuggling in from Europe, and in subsequent years she helped arrange for funding of research efforts to develop spermicidal gels and hormonal contraceptives. After World War II, Sanger concentrated on international aspects of the Birth Control movement, helping to found the International Planned Parenthood Federation in 1952.

Sanger died in Tucson, Arizona, on September 6, 1966, only a few months after the Supreme Court’s decision in Griswold v. Connecticut (1965) found that the right to privacy made Birth Control legal for married couples. Sanger was eighty-six years old.