Benjamin Rush, early America’s most renowned physician, was a distinguished scientist and educator, an ardent patriot and politician, as well as an untiring social reformer and opponent of slavery. Born on January 4, 1746 in Byberry Township near Philadelphia, he was the fourth child of John Rush, a farmer and gunsmith of Quaker descent, and Susanna (Hall) Harvey Rush. After John Rush’s death at an early age, Susanna sent Benjamin to Nottingham Academy, a private school run by the Presbyterian minister James Finley in Cecil County, Maryland. Upon Rush’s graduation in 1759, Finley arranged for his admission to the College of New Jersey (later Princeton University) from which he obtained his bachelor’s degree in 1760. At Nottingham and the College of New Jersey, Rush received a classical education as well as a firm grounding in science and mathematics. He also imbibed strong religious beliefs that reinforced his lifelong commitment to charity and social reform. 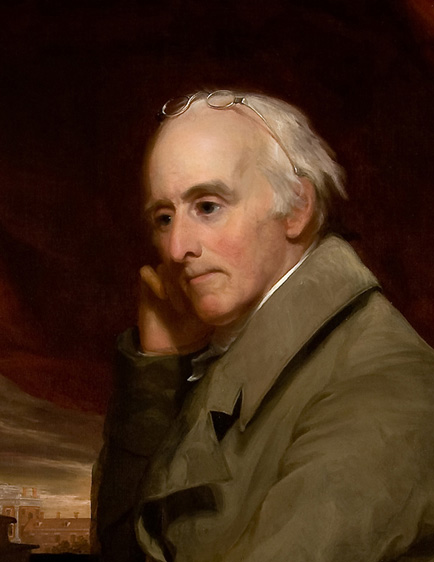 Benjamin Rush (1746&ndash;1813)Upon his return to Philadelphia in 1761, Rush apprenticed himself for five years to Dr. John Redman, a disciple of the Dutch physician and advocate of bloodletting Hermann Boerhaave. He also attended lectures by Dr. William Shippen, Jr. and Dr. John Morgan at the College of Philadelphia, and he supported the patriot cause during the Stamp Act crisis. In 1766, Rush set sail for Britain to study medicine under Dr. William Cullen at the University of Edinburgh. After receiving his medical degree in September of 1768, Rush held residencies at Middlesex Hospital and St. Thomas’s Hospital in London. Encouraged by Benjamin Franklin to visit Paris, Rush toured France. He became committed to Enlightenment principles and developed a firm belief in human progress.

Returning to America in 1769, he joined the faculty of the College of Philadelphia and became the first professor of chemistry in the United States. He also began his medical career as a private practitioner, initially serving the poor but gradually expanding his practice to include members of the Presbyterian Church that he attended and some of Philadelphia’s elite. He was appointed attending physician for the Philadelphia Almshouse in 1772 and the Society for Inoculating the Poor in 1774. He held these positions until his death.

In the early 1770s, Rush emerged as a leading social reformer and a prolific writer. In 1772, he published Sermons to Gentlemen upon Temperance, which influenced the nineteenth-century temperance movement including the Women’s Christian Temperance Union. In 1773, he initiated his campaign against slavery, publishing his Address to the Inhabitants of the British American Settlements, upon Slave-Keeping and, following a storm of criticism, A Vindication, a pamphlet in which he defended his antislavery views. These works contributed to the founding of America’s first antislavery society, the Pennsylvania Society for Promoting the Abolition of Slavery and the Relief of Free Negroes Unlawfully Held in Bondage.

The onset of the imperial crisis witnessed Rush’s fervent embrace of the patriot cause. After the passage of the Tea Act, he published a series of articles under the pseudonym of Hampden and encouraged Thomas Paine’s writing of Common Sense. Following the battles of Lexington and Concord, Rush became one of Pennsylvania’s first and strongest proponents of independence. Elected to Philadelphia’s Committee of Safety, he was also a member of the Continental Congress, a signer of the Declaration of Independence, and the physician general for the middle department of the Continental Army, a post he resigned after a dispute with the Army’s chief physician, Dr. Shippen, Jr. After the Battle of Brandywine, Rush became mired in the infamous Thomas Conway scheme, which sought the removal of George Washington as the leader of the Continental forces. In 1776, Rush married Julia Stockton, the daughter of Richard Stockton of New Jersey. They had thirteen children, four of whom died in infancy.

Although in the 1780s Rush focused on expanding his private practice, he remained active in political and social affairs. As a delegate to the Pennsylvania convention on ratification, he was outspoken in favor of adopting the Constitution. He continued his support of the temperance movement and became secretary, and later president, of the Pennsylvanian Abolition Society. After developing extensive records on the mentally disturbed at the Pennsylvania Hospital where he was appointed staff physician in 1783, he wrote An Enquiry into the Physical Causes upon the Moral Faculty (1786).

Rush’s detection of the correlation between disease and uncovered polluted waters precipitated his involvement in municipal improvement projects. He campaigned for the cleanup of Dock Creek, a mosquito-ridden sewer that ran through Philadelphia. A strong believer in a virtuous and informed citizenry, he became one of the first American advocates of statefinanced education. He helped to found Dickinson College as well as Franklin (and Marshall) College. He also advanced the idea of a federal university and proposed an expanded curriculum for women’s education. Late in the decade, he embarked on a campaign for the reform of the penal system and criminal justice, attacking public punishment and demanding the elimination of the death penalty except for first-degree murder. In 1789, he published his most famous professional work, Medical Inquiries and Observations.

In the 1790s, Rush extended his efforts for social reform to the advancement of the religious and educational welfare of African Americans. He supported the founding of the African Episcopal Church of St. Thomas, the first African-American Episcopal Church in the United States. In 1794, he made a heroic, yet ill-designed, attempt to stem the epidemic of yellow fever in Philadelphia through the application of herbal purges and bloodletting, treatments that unfortunately may have increased the death rate. His efforts led to a bitter court battle with William Cobbett. Rush, a leading Republican in the mid-1790s, sued the arch-Federalist publisher for libel following the latter’s vicious attacks on his bloodletting treatments. The public criticism hurt Rush’s practice and distanced him from the College of Physicians of Philadelphia from which he eventually resigned. Although Rush won a settlement of $8,000 in court, he received only half of the amount before Cobbett fled to England to avoid financial ruin.

In his final years, Rush pursued his interest in mental illness and published a comprehensive work entitled Medical Enquiries and Observations upon the Diseases of the Mind (1812), which served as the first American text on psychiatry. Rush is still recognized as ‘‘the father of American psychiatry.’’ He continued private practice, acted as president of the Pennsylvanian Abolition Society, promoted veterinary medicine, and assumed the position of treasurer of the United States Mint. Committed to disinterested public service, Rush expressed disillusionment with the rising importance of ‘‘interests’’ during the new nation’s remarkable economic expansion in the early nineteenth century. Rush died in Philadelphia on April 19, 1813, and was buried in Christ Church Burial Ground. In the late nineteenth century, temperance reformers marked his grave with a memorial plaque acknowledging him as the ‘‘instaurator of American Temperance Reform.’’