John Bordley Rawls, philosopher and political theorist, was born in Baltimore, Maryland on February 21, 1929, and died November 24, 2002. He married Margaret Warfield Fox and they had four children. Rawls earned a Ph.D. in 1950 in philosophy from Princeton University. He taught there, and then at Cornell University and MIT. In 1962 he joined the faculty of Harvard until his retirement. His work encompasses social contract theory including principles of justice, civil liberties, economics, religion, social science, international relations, human rights, just war criteria, and ethics. His theory reflects moral and egalitarian presuppositions, and his philosophical perspective pervades and enriches his thought. 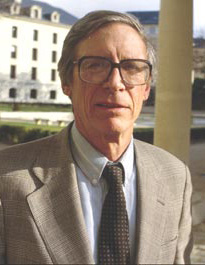 Rawls sought to create a theory that could supplant that of utilitarianism with its inherent inequities. He wrote A Theory of Justice (1971), which offers a social contract theory for modern pluralistic democracies. Rawls’s principles of justice apply to the basic structure of society, which refers to major social institutions of society such as the political constitutions and major social and economic arrangements. Rawls’s theory is comprehensive, coherent, and internally consistent.

Rawls’s principles of justice are chosen by rational contractors in a theoretical construct that he terms the ‘‘original position,’’ which is designed to foster impartiality in the choice of principles. In this hypothetical context, to ensure that the contractors do not select principles of justice that would preference their own individual self-interests, Rawls places them behind a ‘‘veil of ignorance.’’ They do not know what their social positions will be, or their religious beliefs, philosophical commitments, moral convictions, level of intelligence, or degree of wealth, the knowledge of which would enable the rational contractors to select principles of justice that would further their own interests. The principles are chosen in a context that eliminates bias, and are those that Rawls believes would be chosen in this situation.

Rawls’s two principles of justice guarantee that political liberties are to be equally held by all citizens. The first principle of justice specifies that each is to have a right to basic liberties that is compatible with the basic liberties of others. This principle takes priority over the second principle, which ensures equality of fair opportunity in respect to the attainment of offices and positions as well as specifying that social and economic inequalities are to be arranged so that they benefit the least advantaged. Over time, this tends to reduce inequalities among citizens by improving the lot of the least advantaged. It reflects the egalitarian perspective that pervades Rawls’s thought.

Rawls conceives of persons as rational, free, equal, having intrinsic worth and dignity, and possessed of two moral powers. These powers are a capacity for a sense of justice and the ability to conceive of the good and to rationally seek it. Liberties enable people to develop these moral powers. He envisions a wellordered society as one in which equal citizens act according to a shared conception of justice, with cooperation and mutual respect prevailing. Rawls’s work moves from a consideration of social contract theory to a narrower focus on political liberalism’s capacity to achieve a stable society despite the pluralism intrinsic to modern democracies.

Rawls’s basic liberties include freedom of political speech and press, freedom of assembly, liberty of conscience, freedom of thought, and freedom of association. Rights and liberties are covered by the rule of law. The liberty and integrity of persons is violated by slavery and serfdom. Rawls sees liberties protected by the U.S. Constitution’s First Amendment as essential to control the misconduct of government. Basic liberties are inalienable and cannot be justly denied to any person, group, or all citizens by the majority. Free and equal citizens may vote as they wish.

Rawls discusses freedom of political speech and regards libel and defamation of private, not political, figures as private wrongs with no significance for the basic structure of society that is central to his theory. Free political speech combined with the just political procedures specified by a constitution offer a way to avoid revolution and the use of force. He cites within the history of constitutional doctrine fixed points regarding free speech: the protection of the advocacy of subversive and revolutionary doctrines, unrestrained freedom of the press, with few exceptions, and that seditious libel is a nonexistent crime. If it were, this would impede free discussion that informs voters. Political, religious, and philosophical discussions are not to be censored.

If subversive advocacy is suppressed, the reasons being proposed for revolution are made unavailable to citizens who are then unable to judge from this perspective the justice of their society. This violates freedom of thought. The clear and present danger rule entails a consideration of the proximity and degree to which subversive advocacy will result in lawlessness. Rawls rejects these criteria and states that for free speech to be suppressed, there must be a constitutional crisis of the sort in which democratic institutions fail to function adequately, and emergency procedures are inoperable. He rejects appeals to emergencies even involving the possible destruction of the state as not offering sufficient reason to override freedom of speech. Rawls suggests that in the United States, historically free political institutions have continuously functioned and the requisite constitutional crisis justifying the suppression of free speech has not arisen.

Rawls advocates limits to political campaign donations. The equal opportunity component of his principles of justice in which all are equally to have access to political and social positions of power is undermined when the wealthy have an advantage over others in the electoral process and spheres of influence. All should have equal representation, which is essential to protect basic rights.

Rawls affirms the importance of due process, impartiality, and open and fair trials. He connects the rule of law with liberty. People have a right to own personal property. Rawls regards this liberty as providing a sense of independence and self-respect as well as enhancing moral powers. Significantly, the moral power of rationally determining and seeking one’s good does not limit ‘‘good’’ to a moral designation, but expands it to include primary goods, which encompass not only liberties, rights, and opportunities, but things such as income and wealth, which people make rational plans to acquire in order to pursue desirable types of lives.

In the area of reproductive freedom, Rawls approves of abortion in the first trimester, because of the equality of women, which allows them to make this decision during the early stage of pregnancy. He views the role of the family to be one of not only raising and caring for children, but also of instilling within them a moral sense and an ability to fit into the culture and become good citizens. This does not require a particular form of family. Families that foster these values may be monogamous or heterosexual. Gay and lesbian rights and duties that are in this sphere of orderly family life are admissible.

Freedom of conscience is a significant theme in Rawls’s work. He consistently and strongly advocates ensuring this liberty. Concerned with the divisive nature of the wars of religion arising from the multiplicity of religions in the aftermath of the Reformation, Rawls sought a way of obtaining a well-ordered democratic society in the face of rampant pluralism, not only of religions, but of cultural backgrounds and philosophical convictions. He removes these elements from the political sphere and places them in what he terms ‘‘comprehensive doctrines.’’ These encompass religious, philosophical, and moral convictions and commitments that are central to people’s conceptions of the good and impart meaning to their lives. Justice as fairness is a political conception of justice and not part of any comprehensive doctrine. By separating the political from privately held convictions in comprehensive doctrines, divisive elements are removed from the political sphere. This contributes to social stability, as does the fact that there is an overlapping consensus on the subject of justice by citizens with widely conflicting convictions within their comprehensive doctrines. Rawls does not advocate suppression of free speech regarding them, but disallows them as part of the political agenda. The enormously divisive issues in society, such as abortion, have not resulted in civil war. The government continues to function despite significant social problems. This may be attributable to the stabilizing influence of a shared acceptance and recognition of the value of the Constitution. This overlapping consensus leads to changes being sought within the system rather than by revolution. Rawls does not claim that an overlapping consensus on the subject of justice leads to a harmonious ideal society, but only that it fosters stability in the face of a multiplicity of exceedingly incompatible and divisive convictions.

The political virtues include fairness, tolerance, being ready to meet others halfway, and cooperation based on mutual respect, which is reflected by Rawls’s conception of reciprocity. He stresses that social cooperation is for mutual benefit. Reciprocity ensures that each benefits and citizens mutually cooperate. The basic structure of society is based on fair terms of cooperation.

Religious Voices in the Public Sphere

Rawls’s political liberalism regards both rational secular arguments and religious ones in the same way: they do not provide public reasons and are outside the realm of the public political domain. Public justification is entailed; in addition to the requirement of valid reasoning, religious and secular arguments must also offer premises and conclusions that could be reasonably accepted by others. This transforms privately held convictions into ones that are compatible with public reason in the political domain. This requirement that others see the arguments as reasonable leads to concurrence by eliminating divisive stances that are unsupported by public reason and on which there is no agreement. This restriction disallows religious convictions that may not meet his proviso’s criterion, but nonetheless could be considered reasonable within their own conceptual schemes, such as systematic theologies. Rawls’s requirement does not counter his advocacy of freedom of conscience, but his narrow construal of ‘‘reasonable’’ may circumscribe the extent to which religious voices could be heard in public policy discussions.

Rawls advocates religious toleration, which mitigates conflicts both between religion and democracy, and among religious doctrines. His conception of justice protects religious liberty. The separation of church and state protects the church from the state and citizens from their churches (they may change their faiths and even apostatize), as much as it protects the secular culture from religious influence.

This separation strengthens democracy. The principles supporting it are those that citizens in a pluralistic society can endorse. Civil society need not be based on a religious establishment. The school prayer issue involves the type of reasons citizens offer to justify political choices. Given the pluralism of modern democracies, citizens would not accept religious reasons for school prayer.

In The Law of Peoples (1999), Rawls extends his theory to include international relations. He regards liberty of conscience as a human right and this stance concurs with the Universal Declaration of Human Rights of 1948, which includes the right to life, liberty, and security of the person, and prohibits torture and degrading treatments and punishments. Both the Declaration and Rawls’s theory share the concepts of persons as free, rational, and equal in dignity and rights.

Rawls revises traditional powers of sovereignty including the right to go to war and unrestricted political autonomy. His just war thought limits the right to go to war to the criterion of self-defense. Well-ordered peoples may wage war against outlaw states whose expansionist aims threaten the security of well-ordered states, or, in grave cases, to protect human rights. The political and moral force of human rights extends to all nations, peoples, and societies. Outlaw states that severely violate them may face intervention by well-ordered states. Internal autonomy does not extend to suspending human rights.

Rawls’s theory is comprehensive, cogent, and consistent, and has had inestimable influence in a number of fields including philosophy, law, and political theory. He is widely regarded as the most significant political theorist of the twentieth century.