Wendell Phillips, abolitionist activist and orator, was born in 1811 into a prominent family on Boston’s Beacon Hill, son of a lawyer who served as mayor and a mother who came from a wealthy background. He was educated at Harvard College and Harvard Law School, and he opened a law office in Boston. But in 1835 he watched a mob nearly lynch abolitionist publisher William Lloyd Garrison, and he soon became deeply involved in the fight against slavery. After he married an antislavery activist, Ann Greene, he moved deeper into the abolitionist camp. 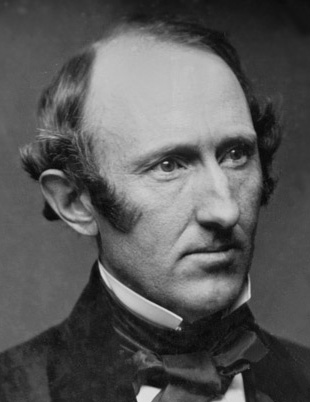 His involvement became visible in late 1837 when he spoke at a Faneuil Hall rally to protest the murder in Illinois of abolitionist Elijah Lovejoy. When the Massachusetts Attorney General spoke in defense of the mob that killed Lovejoy, Phillips defended Lovejoy’s freedom of the press to publish antislavery material and assailed ‘‘the tyranny of this manyheaded monster, the mob.’’ Lovejoy, he said, ‘‘took refuge under the banner of liberty— amid its folds; and when he fell, its glorious stars and stripes, the emblem of free institutions, around which cluster so many heart-stirring memories, were blotted out in the martyr’s blood.’’

The eloquence of his Faneuil Hall speech established Phillips as a leading orator, a skill for which he won high praise throughout his life. Some observers at the time said his oratory outdid even the more famous Daniel Webster. Although he came to lecture on a variety of subjects, his antislavery orations often were in the voice of a dissident, and audiences were sometimes thin or even hostile. But of his later years, historian James McPherson wrote that, in 1862 Phillips, whom he described as ‘‘the most radical’’ of the Abolitionists, lectured in northern states to ‘‘packed houses’’ and appeared in Washington, D.C., where he was formally introduced in the U.S. Senate and met with President Abraham Lincoln.

Phillips quickly staked out an intellectual turf in the antislavery fight. With Garrison, he became a leading proponent of the view that the Constitution was a conscious proslavery document and was not entitled to respect; he even declined to vote because it was perpetuating a proslavery government structure. He outlined this view in 1844 in a pamphlet, The Constitution, a Pro-Slavery Compact, arguing that the nation could not exist as a unified country because the very existence of government under the Constitution supported slavery. His position placed him in opposition to the view that the Constitution should somehow be understood as antislavery because it was subject to the natural rights of individuals. When Massachusetts lawyer Lysander Spooner argued in an 1845 essay that slavery was unconstitutional, Phillips responded in a lengthy essay.

Phillips and Garrison remained allied for most of the period before the Civil War. But Phillips eventually criticized Lincoln’s commitment to eliminating slavery, breaking ranks with Garrison. Phillips argued that the slaves needed more than freedom; they needed education, property, and full rights, measures that neither Lincoln nor Reconstruction planned to provide.