Sandra Day O’Connor, an Associate Justice of the U.S. Supreme Court from 1981 until 2005, cast the swing vote in many civil liberties decisions. O’Connor’s sensitivity toward the factual context of cases and her tendency to prefer broad standards and Balancing Tests over bright-line rules often made her votes unpredictable, and generated criticism that her opinions were inconsistent and lacked a coherent judicial philosophy. Ultimately, her civil liberties jurisprudence may reflect a balance between a fundamental libertarianism and her strong recognition for public order, combined with a firm belief in federal judicial deference to state legislatures. On a wide range of issues, including criminal justice, religious freedom, and racial equality, O’Connor was a centrist whose opinions helped to preserve and sometimes expand the scope of civil liberties. During the final years of her long tenure, she tended to strike this balance more often in favor of individual liberty. 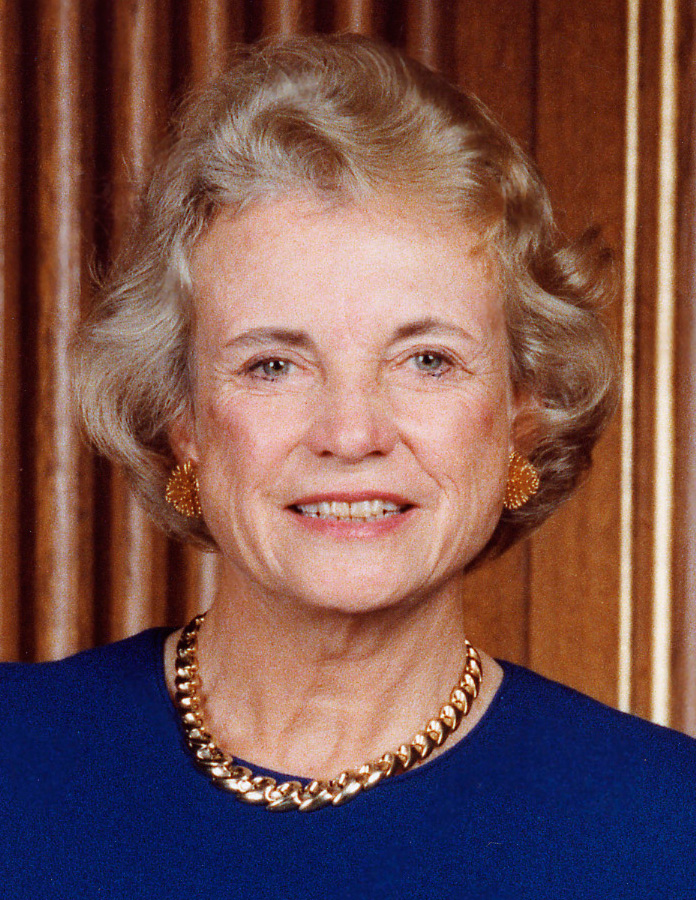 Sandra Day O&rsquo;Connor (1930&ndash;)Born on an Arizona ranch in 1930, O’Connor graduated from Stanford University and Stanford Law School. Although O’Connor ranked third in her law school class, the elite law firms at which she sought employment during the middle 1950s rejected her because they refused to hire women. After serving in various governmental posts and practicing law in her own small firm in Phoenix, O’Connor became an Arizona state senator in 1969, quickly rising to the post of majority leader. She served as trial judge in Phoenix and later as a member of the Arizona Court of Appeals before President Reagan nominated her to the Supreme Court in 1981.

O’Connor was the first of many Supreme Court nominees whose views on abortion were an issue in the confirmation process. Although O’Connor expressed her personal opposition toward abortion in her testimony before the Senate Judiciary Committee, opponents of abortion were concerned because she had voted in favor of an abortion measure during her tenure as an Arizona senator. In her early opinions involving abortion, O’Connor was sharply critical of the trimester framework developed in Roe v. Wade (1973), and she maintained that only regulations that imposed an ‘‘undue burden’’ on abortion should be subject to the Court’s strict scrutiny.

Ultimately, however, O’Connor was instrumental in preserving the constitutional right to abortion first announced by the Court in Roe. In Planned Parenthood v. Casey (1992), O’Connor jointly authored an opinion with Justices Anthony M. Kennedy and David H. Souter asserting that the principle of stare decisis justified retention of Roe because Americans for the past two decades had ‘‘organized intimate relationships and made choices ... in reliance on the availability of abortion in the event that contraception should fail.’’ This opinion also observed that women’s ‘‘ability to control their reproductive lives’’ had facilitated their ability ‘‘to participate equally in the economic and social life of the Nation.’’ O’Connor, Kennedy, and Souter joined Justices Harry A. Blackmun and John Paul Stevens in voting to overturn a Pennsylvania statute requiring married women to notify their husbands before obtaining an abortion, but they voted with four other justices to sustain other restrictions in the statute. O’Connor’s support of abortion rights keenly disappointed many conservatives, who had hoped that she would vote to overturn Roe.

During her tenure on the Court, O’Connor also gradually emerged as something of a champion of the rights of homosexuals. Although O’Connor in Bowers v. Hardwick (1986) cast the swing vote to sustain the constitutionality of a Georgia statute prohibiting homosexual sodomy, she was part of the Court’s sixto- three majority seventeen years later in Lawrence v. Texas (2003), which overturned a similar law. Although five members of the Court in Lawrence contended that a Texas sodomy statute violated due process, O’Connor argued in a concurring opinion that the statute denied equal protection because it branded ‘‘all homosexuals as criminals, thereby making it more difficult for homosexuals to be treated in the same manner as everyone else.’’ Since O’Connor continued to maintain that the Fourteenth Amendment’s due process clause did not impose any substantive limit on the state to enact laws regulating sexual activity, she contended that the vote in Lawrence was not inconsistent with her vote in Bowers. O’Connor also joined the Court’s six-to-three majority in Romer v. Evans (1996), which invoked the equal protection clause to invalidate a Colorado law that prohibited all legislative, executive, or judicial action to bar discrimination based on sexual orientation.

In cases involving religion, O’Connor also was a pivotal figure. Her major contribution was her development of the so-called ‘‘endorsement test,’’ in which the Court considers whether the government has endorsed a practice that is challenged under the Establishment Clause. O’Connor began to develop this test in her concurring opinion in Lynch v. Donnelly (1984), a five-to-four decision in which the Court held that a city did not violate the Establishment Clause by including a creche in a Christmas display in a park. In a later case, Allegheny County v. Greater Pittsburgh American Civil Liberties Union (1989), the Court adopted O’Connor’s endorsement analysis in a fiveto- four decision, joined by O’Connor, holding that the prominent display of a creche in a courthouse was unconstitutional.

O’Connor relied on the endorsement test in her concurring opinion in McCreary County v. American Civil Liberties Union (2005), in which she cast the deciding vote to determine that the posting of the Ten Commandments in a courthouse violated the Establishment Clause. O’Connor similarly relied upon this test in voting with the majority in the Court’s sixto- three decision in Van Orden v. Perry (2005), holding that the display of the Ten Commandments among various historical memorials in a park was not unconstitutional.

In cases involving public aid to religiously affiliated schools, O’Connor also occupied an intermediate position. Although she maintained that the Constitution prohibited direct public aid to such schools, she was more tolerant of aid that was filtered through students or their parents. O’Connor was the swing vote in the Court’s 2002 decision in Zelman v. Simmons-Harris, which upheld the constitutionality of vouchers for the payment of tuition at religiously affiliated schools.

In cases involving criminal procedure, O’Connor’s experience as a trial judge informed her awareness of the delicate balance between the exigencies of law enforcement and fairness toward the accused. As a proponent of the Rehnquist Court’s so-called ‘‘new federalism,’’ O’Connor also urged restraint by federal courts in their review of state criminal decisions. In particular, she was an influential advocate of the theory that a defendant exhaust his state court remedies before seeking relief in federal court.

In death penalty cases, O’Connor moved with the Court toward stricter scrutiny of Capital Punishment laws. Although she concurred in Stanford v. Kentucky (1989), upholding the death penalty for juvenile offenders, she voted with the majority in Roper v. Simmons (2005) to strike down a similar law. Likewise, she voted to permit execution of mentally retarded persons in Penry v. Lynaugh (1989), but joined the Court’s contrary ruling thirteen years later in Atkins v. Virginia (2002).

O’Connor tended to be skeptical of the constitutionality of Affirmative Action programs and cast the deciding vote in Adarand Contractors, Inc. v. Pena (1995), which announced that the Court would strictly scrutinize Affirmative Action programs instituted by state or federal governments, and had the effect of ending most public programs that gave preferences to minority contractors. In Grutter v. Bollinger (2003), however, O’Connor wrote the Court’s opinion for a five-to-four majority in holding that a public law school had a compelling interest in achieving a diverse student body and therefore could use race as a factor in student admissions. In a companion case, Gratz v. Bollinger (2003), which held that a public university could not automatically award racial minorities points for use in admissions, O’Connor wrote a concurring opinion arguing that the procedure was unconstitutional because it failed to provide ‘‘a meaningful individual review of applicants.’’

In several five-to-four decisions concerning voting districts designed to promote the election of African Americans, O’Connor voted with the majority in holding that the equal protection clause prohibits legislatures from using race/ethnicity as the predominate factor in drawing district boundaries. O’Connor wrote the opinion in the Court’s seminal opinion in Shaw v. Reno in 1993.

In another case involving equal protection of voting rights, Bush v. Gore (2000), O’Connor cast the decisive vote in holding that a manual recount of certain Florida votes in a contested presidential election would be unconstitutional. In the wake of the Court’s decision, Albert Gore, Jr. conceded the election to George W. Bush.

In the Court’s first so-called ‘‘right to die’’ decision, Cruzan v. Director, Missouri Department of Health (1990), O’Connor cast the deciding vote in support of the Court’s ruling that a state could require clear and convincing evidence that a permanently unconscious person would have wanted the withdrawal of life support systems, but she wrote a separate concurring opinion emphasizing that terminally ill persons have a liberty interest in refusing unwanted medical treatment. She reiterated this theme in her concurring opinions in Washington v. Glucksberg and Vacco v. Quill in 1997, which held that the Constitution confers no right of physicianAssisted Suicide.