Richard Milhous Nixon, thirty-seventh president of the United States and a controversial political figure, was born in 1913 in Yorba Linda, California into a Quaker family. After graduating from Whittier College and earning a law degree in 1937 from Duke Law School, the young attorney returned to Whittier to practice law. During World War II, Nixon went to Washington where he served in the Office of Price Administration. He subsequently served as an officer with the U.S. Navy in the Pacific and, he returned home to Whittier after the war to resume his law practice. 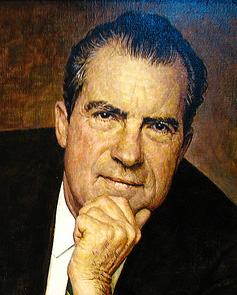 Nixon’s lifelong passion for politics surfaced in 1946 when he was tapped by a committee of Republican business and professional men to challenge Democratic incumbent, Jerry Voorhis, for a seat in the House of Representatives. In his campaign, the young contender began early on to hone his ‘‘take no prisoners’’ political skills as he exploited the increasingly popular issue of anticommunism. The strategy worked, and he soundly defeated the five-term congressman. In the House, he enhanced his reputation as one of the nation’s leading anticommunist crusaders by serving on the House Un-American Activities Committee (HUAC). He acquired national recognition as HUAC’s star investigator in the Whittaker Chambers– Alger Hiss hearings. The serious young congressman received accolades for his dogged, yet careful, sober examination of witnesses.

Anticommunism was also the decisive issue in his senatorial victory in 1950 in a campaign in which Nixon challenged Democrat Helen Gahagan Douglas. Both candidates slung broadsides at each other with wide-ranging accusations of procommunist leanings. Nixon’s reputation, however, as a ruthless anticommunist was significantly advanced with his distribution of the infamous ‘‘pink sheet’’ that detailed the similarities between Douglas’s voting record and that of Socialist (and probable communist) congressman, Vito Marcantonio. Nixon’s red-baiting strategy was enormously successful; he won the Senate seat with a healthy plurality. After only two years in the Senate, Nixon’s solid anticommunist credentials brought him to the attention Republican presidential candidate Dwight D. Eisenhower, who needed a running mate that would mollify the conservative wing of the party.

Nixon performed loyally for the Republican Party as vice president, especially as an energetic campaigner for both the President and the Republican Party. In 1960, however, he lost his bid to succeed Eisenhower when charismatic Democrat John F. Kennedy defeated the vice president in an extraordinarily close election. Two years later in 1962, Nixon lost another election, this time to incumbent Democratic California governor, Edmund S. (Pat) Brown. In a maudlin, selfpitying press conference after his defeat, Nixon offered a clue to the problems that would plague his later political career when he blamed the press for his loss, declaring that they would not have him to kick around anymore.

Nixon, however, was not finished with politics and, in spite of his promise that his political career was over, for the next six years he remained a Republican stalwart and loyal campaigner for Republican candidates. By 1968 he had become the titular leader of the party and its candidate for president. He engineered a close victory over Democrat Hubert H. Humphrey with his ‘‘Southern strategy,’’ which targeted southerners and northern blue collar workers, former members of the New Deal coalition, who had had enough of Democratic liberalism and youthful war protest. Nixon’s appeal to this silent majority changed forever the political complexion of the two major parties and shifted the political center significantly to the right.

This political realignment, however, would not be the distinguishing characteristic of Richard Nixon’s political career. Neither would he be most remembered for his considerable foreign policy achievements in his first term: de´tente with the Soviet Union, diplomatic recognition of the People’s Republic of China, withdrawal of most U.S. forces from Vietnam, and Secretary of State Henry Kissinger’s mostly skillful navigation through the minefield of Arab–Israeli hostility. It would be the politics of Nixon’s ‘‘imperial presidency’’ and his misuse and abuse of executive power that would come to define both his presidency and political career.

The presidential administration of Richard Nixon was focused on politics and political combat. Nixon seemed to view himself always as a victim, under attack by enemies, such as the Congress, the Eastern liberal establishment or the media, who were out to undermine his presidency and blemish his image. This siege mentality, which was exacerbated by Nixon’s isolated management style and reliance on a very loyal White House staff, created a modus operandi in the administration that would result in the wholesale abuse of presidential power, based to a significant degree on a wide-ranging disregard for civil liberties and constitutional limitations.

Within the first year of his administration, the president indicated that he wanted in place a domestic intelligence system to be coordinated out of the White House. The Huston Plan (after its author, White House staffer, Thomas Charles Huston), which was presented to Nixon in July 1970 proposed a permanent interagency committee that would oversee a broad range of surveillance activities such as mail openings, burglaries, and infiltration in the pursuit of keeping track of administration ‘‘enemies.’’ The White House did, in fact, maintain a list of such persons who became targets of such surveillance, as well as harassment by various government agencies. Although the plan never got off the ground because of the civil liberties concerns of FBI Director J. Edgar Hoover, the activities that Huston proposed would become part of White House solutions to various problems.

Especially troublesome to Nixon and his staff were leaks to the media. Nixon and his two closest advisors, Robert Haldeman and John Ehrlichman, became obsessed with tracking down administration employees who fed information to the press. Wiretaps were routinely installed on the telephones of both staffers and journalists beginning with national security employees in 1969. Wiretapping, however, was not used just for press leaks. Other administration ‘‘enemies’’ such as antiwar protestors and black militants were also the target of electronic surveillance, all in the alleged interests of national security.

The culmination of this paranoia about leaks came with the organization of what came to be called the ‘‘Plumbers’’ unit in 1971. Nixon was enraged when antiwar activist Daniel Ellsberg leaked the Pentagon Papers to the New York Times. Although the papers dealt with the Vietnam policy of previous administrations, Nixon was concerned that he would be pictured as having no control over either his staff or the bureaucracy. He called for the creation of a group that originally was to focus on plugging leaks to the media, although ultimately its members became engaged in covert operations against many other of the administration’s perceived enemies. The group’s first major project was the illegal break-in of Daniel Ellsberg’s psychiatrist’s office in pursuit of information that could be used to discredit Ellsberg. The Plumbers were also used against political targets, especially in the 1972 re-election campaign, working closely with the Committee to Re-Elect the President.

Reprisal against White House ‘‘enemies’’ was not just limited to wiretaps and ‘‘black bag jobs.’’ Nixon and his White House staff blithely used various government agencies to harass administration opponents. The Internal Revenue Service was very frequently asked to conduct audits on journalists, liberal lobbying groups, recalcitrant Democrats, and any other individual or organization that opposed Nixon policies. The FBI was also called into service for electronic surveillance or the harassment of White House opponents through unnecessary background checks. Pressure was put on the Federal Communications Commission (FCC) to monitor network programs with regard to ‘‘fairness,’’ and transcripts of Oval Office tapes indicate that Nixon expressed interest in using FCC licensing requirements to retaliate against enemies such as the Washington Post.

The crescendo of this abuse of executive power and its accompanying disregard for constitutional liberties reached its peak during the 1972 presidential re-election campaign. Although Nixon and his staff established a separate organization to coordinate the campaign, the Committee to Re-Elect the President (CREEP), it was clearly the White House and the president who were in charge. From the very beginning, White House staffers saw to it that Democratic contenders were harassed with all varieties of ‘‘dirty tricks,’’ such as sending out invitations to nonexistent Democratic functions and planting false stories in the newspapers about Democratic candidates and their families. The campaign worked diligently at squeezing money out of Republican supporters, sometimes almost to the level of extortion. It was, however, the continuing obsession with ‘‘intelligence’’ that would bring down the Nixon White House. When a team of burglars, tied to CREEP, and ultimately linked to the White House, was apprehended on a bugging mission at the headquarters of the Democratic National Committee in the Watergate office complex in June 1972, the resulting cover-up, with the knowing participation of the president of the United States, was eventually exposed by two young Washington Post reporters and involved the White House in a tangled web of lies and obfuscations. The denouement of the ugly incident came in August 1974 after months of investigations, not only by the press, but also by judicial authorities, a Senate special committee, and a special prosecutor, when Richard M. Nixon, faced with impeachment by the House of Representatives, became the first president to resign. In the course of these probes, the revelation and release of recordings of Oval Office conversations made clear not only the extent of Nixon’s participation in the cover-up of the Watergate break-in, but also the wide-ranging abuse of power in which the White House had been engaged during the president’s tenure. The Articles of Impeachment, passed by the House Judiciary Committee in the last days of July, charged the president with offenses related directly to the obstruction of justice with regard to Watergate, but also more generally with abuse of presidential power in ‘‘repeated ... conduct violating the constitutional rights of citizens, imparting the due and proper administration of justice and the conduct of lawful inquiries, or contravening the laws governing agencies of the executive branch and the purposes of these agencies.’’

Nixon spent his post-presidential years in California, where he focused on engineering a revived reputation as the U.S. senior expert on foreign policy, and publishing a number of books on the subject. In the final analysis, however, Richard Nixon remains an enigmatic figure. Although passionate about politics, a masterful political strategist and, often intelligent master of public policy, his willingness to go to excessive lengths in pursuit of political success as well as policy objectives certainly diminished the achievements of his presidency.