Baron de Montesquieu, Charles-Louis Secondat, was an eighteenth-century French political philosopher who had a crucial impact on the development of liberalism, civil liberty, and democratic constitutionalism. He is perhaps most revered for his theory of the separation of powers, which influenced the framers of the American Constitution. 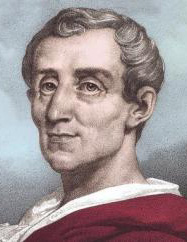 Montesquieu was born into a French family of nobility and affluence (1689) and studied law in Bordeaux and Paris. He presided over the criminal division of the Parlement of Bordeaux from 1716 to 1727, intimately familiarizing himself with the machinery and administration of criminal justice in pre-Revolutionary France. Montesquieu published his Persian Letters in Amsterdam in 1721, assuring him of a literary career, and thereafter pursued political and philosophical writing in earnest. While The Spirit of the Laws did not appear until 1748, it was a great (and controversial) success and has earned Montesquieu a permanent place in the history of Western political philosophy. He died in 1755.

Skeptical of governmental power, Montesquieu argued that individuals should be as free from restraint as possible as long as existing laws were adequate for the provision of public tranquility and personal safety. Many of Montesquieu’s ideas about individual liberty and public tolerance anticipated those of the English political philosopher, John Stuart Mill (1806–1873). Those who see the Bill of Rights of the U.S. Constitution, for example, as the heart and soul of American civil liberty can appreciate Montesquieu’s early defense of liberal freedoms. But Montesquieu’s most important contribution was to thinking about political structures and the forms of government in their relationship to democratic rule. It is the body of the U.S. Constitution, prior to the first Ten Amendments, where the blueprint for liberal rule is laid out and without which no regime of civil liberty could survive. The separation of powers, for example, a concept pioneered by Montesquieu, puts in place a system of checks and balances that by limiting concentrations of governmental power, limits the ability of the state to deprive citizens of legitimate freedoms and interests.

One need only consider the historical fate of civil liberty under ‘‘states of exception’’—regimes where conventional safeguards on the power of the executive are temporarily suspended—to see just how fragile individual freedom and legal rights can become, dependent as they are upon a liberal system of free institutions grounded in separated governmental powers. Contemporary Italian political philosopher Giorgio Agamben has demonstrated the increasing reliance upon states of exception in the political management of liberal democracies in the past half century. Thus, one can argue that Montesquieu and his critique of the forms of government are as relevant today as ever.

There is an alternate (primarily French) and rather significant reading to be had of Montesquieu. Relying upon a close analysis of Montesquieu’s writing, especially the generally ignored, ‘‘Notes on England,’’ as well as earlier research by Charles Eisenmann and Louis Althusser, Iain Stewart argues that contrary to a common criticism made of Montesquieu’s historical foundations, the author of the ‘‘Notes on England’’ understood the true nature of British constitutionalism ‘‘but knew that British politics were thoroughly corrupt.’’ Conventionally understood, the basic notion of separating government powers would hardly cure the British system of its worst defects.

Why? Analogizing Montesquieu’s Britain to the republican regime at Venice, Althusser quotes from The Spirit of the Laws: ‘‘But the mischief is, that these [three] different tribunals are composed of magistrates all belonging to the same body; which constitutes almost one and the same power . . .’’ (Althusser, 90– 91). The heart of the problem is what Althusser calls ‘‘a political problem of relations of forces, not a juridical problem concerning the definition of legality and its spheres’’ (Althusser, 91). Whether one contrasts a purely formal and legalistic treatment of the separation of powers to a genuinely political analysis, as do Stewart, Eisenmann, and Althusser, or to a sociological critique, as does Franz Neumann, the fact is that the radical potential of Montesquieu’s political theory has been systematically ignored, according to these writers, and a kind of harmless mythology put in its place.

In short, with contemporary American government in mind, what does the separation of powers mean when each of the separated powers is beholden to, or even run by, millionaires? The French think Montesquieu had already seen through the misuse of separation theory—its purely juridical reconstruction as a veil or mask for the concentration, not separation, of power. How much difference can there be, in terms of possible implications for civil liberty, between the notorious state of exception described by Agamben and the simulacrum of checks and balances, the mere projection of an image of separated powers onto a political screen, like the shadows in Plato’s cave?