In the late 1960s and early 1970s, John Newton Mitchell climbed to the height of American jurisprudence with an appointment as the U.S. attorney general and promptly descended into controversy as an architect of the break-in of the Democratic Party’s national headquarters in the Watergate Hotel in Washington, D.C., and its subsequent cover-up, for which he served time in prison. 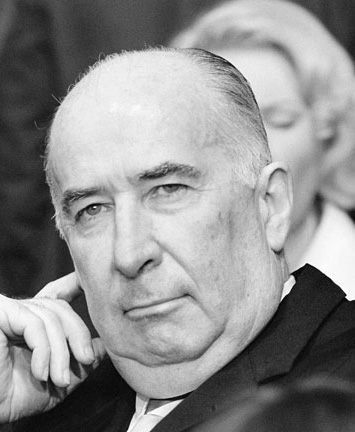 Mitchell was born on September 5, 1913, in Detroit, Michigan. He studied law at Fordham University in New York, earning his degree and commencing the practice of law in 1938. He served in the Navy during World War II and was awarded the Silver Star for gallantry. After his military service, he continued to practice law in New York City and eventually, in 1967, his law firm merged with Richard Nixon’s firm.

The following year, he served as Nixon’s presidential campaign manager. In January 1969, President Nixon appointed Mitchell as the sixty-seventh attorney general of the United States, a post he served in until 1972, when he resigned to manage the president’s successful campaign for reelection.

Mitchell ardently asserted the power of government in matters that he felt involved the duration of the Republic, while persistently showing restraint on government involvement in civil rights issues. Consequently, he felt that civil liberties were rightfully restricted in cases involving the preservation of national security. In addition to engineering illegal searches of the offices and files of his political rivals; Mitchell attempted to silence the voices of anti-Vietnam war protesters in Washington, D.C., by having them arrested in mass.

Perhaps, his most pointed attack on the First Amendment came in 1971 with his role in attempting to suppress the publication of portions of the Pentagon Papers. Specifically, the New York Times and the Washington Post were prohibited by the attorney general from publishing the classified documents detailing political and military relations between the United States and Vietnam between 1945 and 1967. The Supreme Court of the United States subsequently found that this injunction was a direct violation of the First Amendment of the Constitution.

Mitchell died at the age of seventy-five on November 9, 1988, and was buried with full military honors at Arlington National Cemetery.