John Stuart Mill was born in London, the son of English philosopher and historian James Mill. The elder Mill believed that by educating his son in advanced subjects from a very young age and shielding the boy from the distraction of other children, he could train the boy to be a great thinker. Under his father’s strict tutelage, the young John Stuart became extremely precocious. His feats of scholarship included mastering Latin and Greek by age ten and beginning his work on logic and political economy in his early teens. 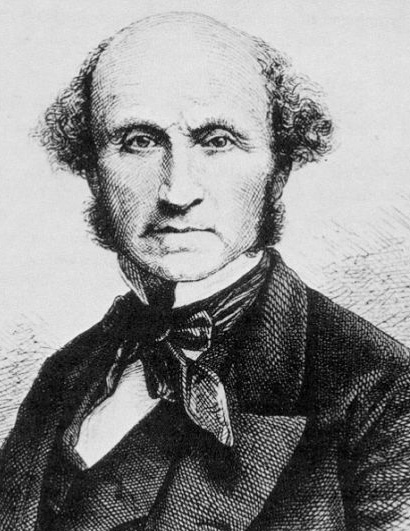 John Stuart Mill (1806&ndash;1873)Like his father, John Stuart Mill believed fervently in the utilitarian principles of Jeremy Bentham. At seventeen, John Stuart founded the Westminster Review with Bentham to educate the public about utilitarianism. However, at the age of twenty-one John Stuart suffered a nervous breakdown that he attributed to the extraordinary intellectual discipline of his childhood and his failure to cultivate feelings or sentiment. This experience taught him the importance of taking pleasure in day-to-day life, and he found special spiritual solace in the poetry of Wordsworth.

Mill was a devoted husband and collaborated with his wife, Harriet Taylor, on many of his best works. He worked in the British East India Company most of his life and wrote in his spare time. From 1865 to 1868 he represented Westminster in Parliament, in which capacity he advocated for women’s rights, women’s suffrage, and anticolonialism. He loved to test his opinions in rhetorical contests with his peers and set up a kind of moot court for that purpose.

Mill’s relationship with American civil liberties is complex and indeterminate because he never lived in America and wrote little about it. However, his influence on America during the nineteenth and twentieth centuries was very great. Mill worked in the same libertarian tradition as Locke and Smith that influencedAmerica’s founding fathers. However, Mill differed from Locke and Smith in important ways that mirror the ways that American law diverged from classical liberalism in the twentieth century. For example,Mill believed that a free market economymust be supplemented by government regulation. Furthermore, his defense of freedom was not based on an imaginary ‘‘social contract’’ or ‘‘natural law,’’ but on the principle of utility. Mill feared the tendency of mercantilism to promote conformity, due partially to his reading of de Tocqueville. Mill’s metaphor of the ‘‘marketplace of ideas’’ has been extensively used in American jurisprudence, especially when dealing with issues of free speech.

Mill’s writings are range too broadly to do justice in the format of an encyclopedia entry. Only those writings most relevant to American civil liberties have been summarized.

In Utilitarianism Mill explained the principle of utility as a foundation for all ethics. He said the highest moral principle is that ‘‘actions are right in proportion as they tend to produce happiness, wrong as they tend to produce the reverse of happiness.’’ From this principle one can extrapolate secondary principles, such as ‘‘do not steal.’’ These secondary principles govern everyday actions. Only in a difficult moral dilemma need one refer to the first principle. The principle of utility gives structure to judgments of guilt or innocence. It is the result of an act that matters, not the actor’s intention.

The difference between utilitarianism and natural law is that Mill did not believe that freedom is good when it produces the ‘‘reverse of happiness.’’ Thus, Mill believed in state-subsidized education and foundations to serve the public good, since consumers’ free choices in the market may not produce happiness. However, Mill also believed that the state only had the power to coerce to prevent harm to another, not harm to oneself. Thus, theoretically Mill would have opposed the use of state power to force people to wear safety belts or not to use drugs.

On the Subjection of Women

In On the Subjection of Women, Mill described male domination of women as a last vestige of early law, which was really a regularization of primitive systems of rights and obligations based on power. Europeans had largely outgrown other vestigial forms of domination, such as slavery and feudalism. However, those systems only directly benefited the king and those with property. The male domination of women benefited every man with a wife, and was therefore more pernicious. However, Mill believed that depriving one half of the species of any legal rights or capacity to participate in civic and political life was a great handicap and did not produce any benefit but plenty of suffering.

Mill fairly summarized the main arguments against complete liberty in order to refute them. First, some might object that the enforcing of wisdom poses no threat to contrary truths because when a contrary opinion really is true, it wins out in the long run anyway. This was the case with modern cosmology, which struggled mightily with Earth-centered cosmology but eventually carried the day. Mill agreed, but felt suppression causes needless suffering and can set the truth back hundreds of years. Second, some might say one has a duty to correct error, and one cannot believe every contrary opinion is the new truth. Mill agreed, but said complete freedom to refute a belief was the very thing that justifies believing it in the first place. Error is better corrected by experience and open discussion. Third, some might say certain beliefs are too important to public safety to suffer dissent. Mill countered that it is possible for one to be wrong about how salutary a belief is. Finally, some might say free expression is good in general, but not when ‘‘pushed to an extreme.’’ On the contrary, Mill argued that unless the arguments for free speech were true in an extreme case, they were not true in any case.

Thus, Mill believed in a ‘‘marketplace of ideas,’’ in which all opinions were free to enter and compete for adherents, becoming sharper and stronger in the process. Mill was the best example. Because of his rigorous testing of his ideas in rhetorical contests with his associates, Mill was very good at summarizing the arguments against his positions and refuting them. This openness to entertaining opposing views, obvious from the clarity and respect with which he treated them, is the illustration of his argument. Because of Mill’s openness, his arguments were on sounder footing, and he truly did acquire good judgment by listening to the arguments against him.

Mill believed that analytical thinking could only get one so far and that, to achieve true understanding, the intellect must be supplemented by the cultivation of feelings. He believed Wordsworth had illuminated areas of human experience not known to philosophy. Mill believed that there was utility in nonintellectual sensation for its own sake. It is here that the criticism that Mill thought people were just acting on intellectual beliefs about proper conduct misses the point. As described in his Autobiography, Mill’s humane vision was that variety of experience for its own sake produces happiness. He believed happiness occurs when one is busy doing something else; one must be open to new sensation. Thus, in his ‘‘Inaugural Address at St. Andrews,’’ Mill encouraged the students to cultivate their aesthetic senses as well as their intellects.

Mill’s career was long and very influential. His writings are an eloquent defense of liberty as fresh and relevant today as they were in the nineteenth century.