A United States senator from Wisconsin, Joseph McCarthy from 1950 to 1954 led a campaign against communists in government that was routinely disdainful of civil liberties. He was so ruthless and effective that the term ‘‘McCarthyism’’ was applied to all of his era’s red-baiting and, more abstractly, to outbursts in later eras of rabid political labeling employing innuendo, assigning guilt by association, and lying shamelessly. 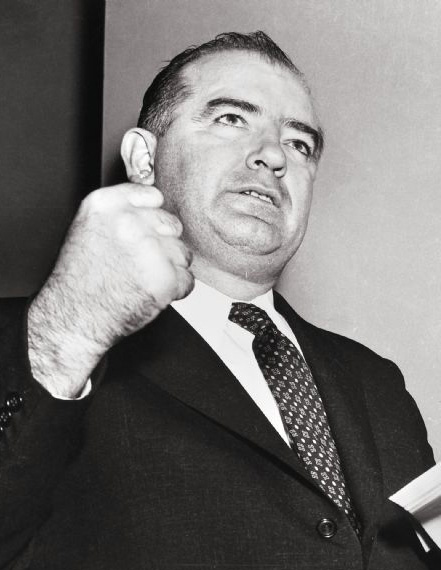 Joseph McCarthy (1908&ndash;1957)McCarthy was born in Grand Chute, Wisconsin, the son of devout Catholics who were struggling farmers. He received his early education in a one-room schoolhouse and quit school at fourteen. However, after unsuccessful ventures as a grocer and chicken farmer, he returned to school at the age of twenty and managed to complete four years of high school in only one year. He then enrolled at Marquette University in Milwaukee, Wisconsin, where he worked part and even full time, enjoyed poker and amateur boxing, and graduated with a law degree in 1935. When running for class president, he and his opponent agreed that each would vote for the other. When McCarthy won by two votes, he admitted that he had voted for himself.

After admission to the Wisconsin bar, McCarthy hung his shingle in the northern Wisconsin towns of Waupaca and Shawano. Three years later he was elected as a circuit judge. He then became known throughout the state for his willingness to issue quick and easy divorce decrees, something much sought in the final years of the fault divorce regime. Milwaukee divorce lawyers were said to drive carloads of clients to McCarthy’s Shawano County court.

In 1942, McCarthy took a leave of absence from the bench and was commissioned as a first lieutenant in the Marines. He served in military intelligence in the Pacific, but when he left the Marines in 1945, he altered and, some would say, improved his military record. He claimed he had begun as a ‘‘buck private,’’ served as a tail gunner, and was wounded in action.

McCarthy employed the sobriquet ‘‘tail gunner Joe’’ in his victorious campaign for the U.S. Senate in 1946. In the Republican primary he defeated incumbent Robert M. LaFollette, Jr., scion of Wisconsin’s most distinguished political family. In the November general election he spoke out against New Deal bureaucrats and also argued that his Democratic opponent, Howard McMurray, was ‘‘communistically inclined.’’

When McCarthy arrived in Washington, D.C., he found the decorum, cordiality, and seniority system of the Senate stifling. Freshmen senators were supposed to remain deferential, but McCarthy was too irascible and ambitious for that. Indeed, he took on fellow senators publicly, often allowing his hot temper to boil over. Some senators considered him a renegade, while other considered him a menace.

McCarthy worried little about what his fellow senators thought of him, but he did worry about finding an issue that would enhance his prominence and assure his reelection. The issue on which he settled was the presence of communists in the government. In a legendary speech delivered on February 9, 1950, in Wheeling, West Virginia, he alleged that the United States, the leader of ‘‘the democratic Christian world,’’ was losing the cold war against the Soviet Union and its allies because the government had been infiltrated by communists, fellow travelers, and other traitorous subversives. McCarthy claimed to have a list of 205 State Department employees whom he knew to be communists. The number turned out to be inaccurate, and most of the named individuals no longer worked in the State Department. But in this instance as well as in many subsequent instances, the naming and labeling more than the accuracy and precision was politically potent.

Many took eagerly to McCarthy’s positions and claims, and within only a few months of the Wheeling speech he was the country’s most discussed cold war politician. The Republican Party played off McCarthy to cast itself as the party that, unlike the pusillanimous Democratic Party, would stand firm against Communism. Even Dwight D. Eisenhower, who had great distaste for McCarthy’s style and lack of character, appeared with him in the 1952 election campaign. Both won easily.

In the Senate, McCarthy showed virtually no interest in drafting and sponsoring legislation. Instead, as chairman of the Senate Committee on Government Operations and its Subcommittee on Investigations, he used investigations and hearings to pursue his enemy—former communists, suspected communists, and, occasionally, actual communists. His methods were anathema to civil liberties. McCarthy was rude and insulting to witnesses, sometimes ostentatiously reading newspapers while they gave statements and frequently badgering, ridiculing, and challenging them. One of McCarthy’s favorite tactics was to announce to the hungry press what a witness was going to say before the witness actually testified. This undermined witnesses’ subsequent testimony and irreparably harmed their reputations.

The targets of McCarthy’s investigations included but were not limited to the Signal Corps, the Central Intelligence Agency, the Government Printing Office, and the International Information Agency, but McCarthy finally went too far when he launched an investigation of the Army. McCarthy’s specific concern was the Army’s alleged interference with an earlier investigation of a research center in Fort Monmouth, New Jersey. He was perhaps surprised to learn that the Army had its own allegations. According to Army records, on forty-four occasions McCarthy, his staff director Frank Carr, and his chief committee counsel Roy Cohn had attempted to obtain special treatment for David Schine, an inductee, unpaid staff member, and Cohn’s best friend.

The hearings took place during April, May, and June of 1954 and, much to McCarthy’s detriment, were televised. A smaller percentage of Americans had televisions than in the present, but one survey showed that two-thirds of the families with televisions were watching the hearings. Retailers also reported a huge surge in television sales. McCarthy attacked and belittled witnesses in his customary fashion, but his sweaty, discourteous aggressiveness came across badly on television.

In addition, McCarthy met his match in the person of Joseph Welch, a sixty-three-year-old Boston lawyer, who served as counsel for the Army. As sly as he was courtly, Welch confronted McCarthy directly on June 4, 1954, when McCarthy brought to light the earlier membership in a leftist organization of Fred Fisher, a promising young lawyer in Welch’s firm. Welch deplored McCarthy for needlessly scarring the reputation of ‘‘the lad.’’ Welch rhetorically asked McCarthy, ‘‘Have you left no sense of decency?’’ The assembled legislators burst into loud applause, leaving McCarthy grimly embarrassed.

After the hearings the Senate, offended for years by McCarthy’s conduct and now realizing he was vulnerable, moved against him. On June 11, 1954, Senator Ralph Flanders of Vermont, a member of McCarthy’s party, introduced a resolution to censure McCarthy. Censure carried no formal penalty, and even after censure, a senator could maintain his or her seniority, positions on committees, and right to vote in the Senate. Nevertheless, censure is a harsh symbolic gesture; prior to the McCarthy resolution, only five senators had been censured in American history. McCarthy fought the resolution, employing distinguished Washington, D.C. lawyer Edward Bennett Williams as counsel. The resolution carried sixty-seven to twenty- two, with all of the Senate’s Democrats and half of its Republicans voting in favor. McCarthy’s behavior was characterized as ‘‘contemptuous, contumacious, and denunciatory’’ and he was deplored for obstructing ‘‘the constitutional processes of the Senate.’’

McCarthy had four more years to serve in his second term, but he had virtually no remaining clout and standing in the Senate. Even more disappointing to McCarthy was the severe decline in his popularity with the general public. He no longer filled lecture halls, and his comments and allegations no longer made headlines. On one painful occasion he showed up at a dinner for Vice President Richard Nixon at a Milwaukee hotel and was asked to leave because he did not have an invitation. Newsmen later found McCarthy sobbing in an alley. Always a drinker, McCarthy was most likely an alcoholic when he came to Washington, D.C. His censure and decline pushed him over the edge, and he drank from morning to night. He died on May 2, 1957, with his wife and a priest at his side. Doctors listed the cause of death as ‘‘acute hepatitis.’’

Why did McCarthy achieve such great power and prominence in the early 1950s? Surely he was not the originator of rabid anticommunist politics; as early as the red scare of the early 1920s, the government deported and persecuted suspected communists. However, with the cold war as a backdrop, McCarthy stoked the fear of internal communist subversion more effectively than any other politician. Although his cause was self-serving, he appears to have believed in it. More importantly, he had a genuine talent for demagoguery. He was bolder than others, smarter than opponents thought, and more reckless than expected. He also had the knack of producing names, numbers, and allegations that the mass media could serve to consumers worried about the communists. McCarthy’s supporters often shared his disdain for civil liberties, a reminder of how fragile those liberties are in wartime and, perhaps, in general.