John Marshall was born September 24, 1755, in Fauquier County, Virginia, and grew up in the frontier counties of that colony. He was educated at home by his father, Thomas, the land agent for Lord Fairfax and a tutor. In 1775, John joined the Virginia militia, which later became incorporated into the Continental Army, where he served as an officer with General George Washington and Daniel Morgan. Marshall participated in many of the major early campaigns of the Revolution, including Great Bridge, Brandywine, Monmouth, and Valley Forge. As one of his biographers, Jean Smith, notes, this service in the army molded Marshall’s nationalism: ‘‘I was confirmed in the habit of considering America as my country and Congress as my government. I had imbibed these sentiments so thoroughly that they constituted a part of my being’’ (Smith, p. 5). 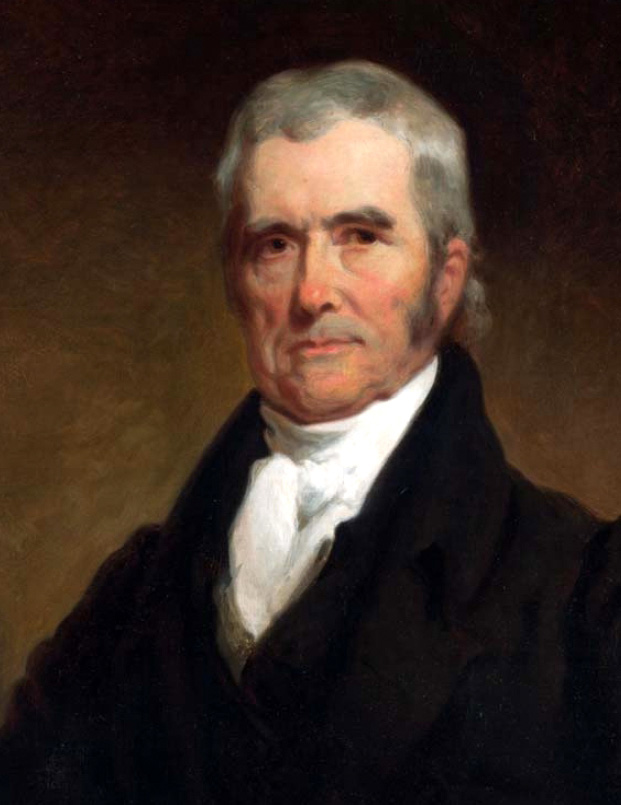 John MarshallIn 1780, Marshall turned his attention to the study of law. He enrolled at the College of William and Mary, where he studied under George Wythe, arguably the leading teacher of the law in the new nation. Following roughly three months of studying, Marshall proceeded to build a thriving private practice in Richmond. He became a successful lawyer and land speculator, ably defending the interests of the purchasers of the former Fairfax estates, which included some of his family members and him. The issue of protecting individual property rights from state taking would come back to visit Marshall while he was chief justice of the U.S. Supreme Court, especially in the cases of Martin v. Hunter’s Lessee (1 Wheaton 304, 1816), Fairfax’s Devisee v. Hunter’s Lessee (1818), and Fletcher v. Peck (6 Cranch 87, 1810).

Chief Justice Marshall recused himself from the first two cases, but wrote the opinion in the last case. He argued that when a state sold land to an individual, that sale constituted a contract, one that could only be ended if the two parties to the contract agreed to dissolve it. These early decisions helped pave the way for Dartmouth College v. Woodward (4 Wheaton 518, 1819), which reinforced the binding nature of contracts. The impact of these later decisions was to offer firm protection of private property from state control and to encourage the growth of a capitalist economy.

Before Marshall became chief justice, he enjoyed success as a politician and government minister. He served as a Federalist delegate in the Virginia constitutional convention of 1788, where he supported the new federal constitution with three speeches and his vote. Marshall’s experience in the Continental Army, especially viewing the weakness of the Continental Congress and the later Confederation Congress, made him appreciate the need for a strong central government. His conservatism and aristocratic world view also made him deeply suspicious of democracy, and thus events such as Shays’ Rebellion of 1786–1787 reinforced his belief in a stronger national government that would curb the popular passions of the people.

During the 1790s, Marshall served in the Virginia House of Delegates; as an envoy to France in 1797– 1798, in what became known as the ‘‘XYZ Affair’’; as a representative from Virginia in the U.S. House of Representatives; and finally as secretary of state under President John Adams. One of the interesting developments in this phase of Marshall’s career was his public disagreement with the high Federalists over the Sedition Act of 1798, which Marshall believed to be a political blunder. He did not attack the law’s constitutionality, noting in the Marshall–Lee paper that the First Amendment protected freedom of religion and the press, but not freedom to print libel.

The culmination of Marshall’s career, though, was as chief justice of the Supreme Court. He served in this role from 1801 until his death in 1835. His decisions and political skills helped him protect the Supreme Court’s independence from the political battles of the Federalists and Republicans in the first decade of the nineteenth century. In particular, the decision in Marbury v. Madison (1 Cranch 137, 1803), though perceived as unimportant at the time, asserted the right of judicial review for the Court. The Supreme Court thus acquired the right to pass judgment on the constitutionality of acts passed by Congress. The Marshall Court built upon this foundation of judicial review by declaring in two key cases— Martin v. Hunter’s Lessee (1816) and Cohens v. Virginia, 6 Wheaton 264 (1821)—that the Supreme Court had the power to review the decisions of state courts and to overturn these decisions if they were in error with federal constitutional interpretation.

Chief Justice Marshall, who wrote about half of the decisions involving constitutional interpretation, also strengthened the power of the national government at the expense of the states. This latter development can be clearly seen in the decisions in McCulloch v. Maryland (4 Wheaton 316, 1819) and Gibbons v. Ogden, 22 U.S. 1 (1824). The first case involved the national bank, while the second concerned itself with steamship lines between New York and New Jersey. The chief justice was not always successful in weakening state power, as the case of Worcester v. Georgia (1832) revealed. Though the Court ruled against the state of Georgia, without the support of President Jackson, there was no way for the Court to enforce its decision.

Finally, Chief Justice Marshall also played a role in establishing the law on treason when he presided over the trial of Aaron Burr in 1807, which resulted in Burr’s acquittal because the government failed to produce two witnesses to an overt act of treason against the United States. The chief justice’s nationalism had its limits. In 1833, the Marshall Court ruled in Barron v. Mayor of Baltimore (7 Peters 243) that the Bill of Rights did not apply to the states. This case involved the seizure of property by the city of Baltimore and whether or not the Fifth Amendment forbade such a seizure. None of the amendments in the Bill of Rights could limit state power, argued Chief Justice Marshall. The Bill of Rights had been written to protect individual liberties from abuse by the national government, not the states. This case reflected the decline of nationalism in the jurisprudence of the Marshall Court from its heyday in the years from 1819 to 1824.

John Marshall’s influence upon the Supreme Court and the nation was immense. He strengthened the Court and made it an equal branch of government with the executive and legislative branches. His Court’s decisions also strengthened the powers of the national government, protected private property, and paved the way for the economic expansion in the last sixty-five years of the century.